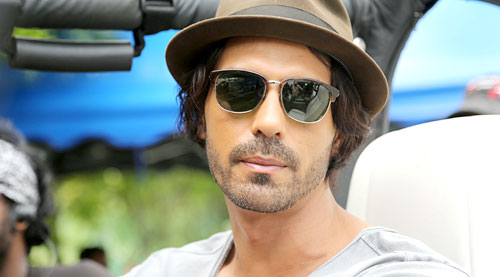 A year and a half after the release of Satyagraha and D-Day, Arjun Rampal is now coming back on the big screen with Roy. Happy with the fact that his film has managed to gain positive hype en route its arrival in theaters, Arjun is positive that there would be good audience footfalls awaiting the Valentine's season release.

You seem to be more excited than ever before about the release of Roy.

The film is unique, it is novel, and it looks fresh. There is always a challenge to get the right film and the right look. Moreover, to get a producer like Bhushan Kumar is something; he has given a great album to me. Moreover, Jackie (Jacqueline Fernandez) is in a double role too, which is superb. She was taken for the film even before Kick. Also, Ranbir is being seen in such a novel role. Everyone is playing a character out here instead of being a hero or a heroine. That's what makes it very exciting because Roy is not like one of those typical movies that you normally see.

So when Roy came to you, what was that special something around the film that made you go for it?

Whatever films that I have done in the past are very content drive. Roy too is a powerful film in its way of narrative and styling. There is inherent drama in it with a thrill aspect to it. With romance, there is so much scope of music to it. Everything is weaved in wonderfully well. I will tell you something interesting. The film came to me four years ago. Vicky (Vikramjit Singh) approached me after Raajneeti and at that time the script was in its infancy. I liked the concept and the idea. I knew that most probably Ranbir would in there too. That's how we started talking.

(Smiles) Vicky disappeared and took two years to get the script absolutely right. It was in the third year when the producer, dates and everything else was in place. Now it is almost the fifth year since I heard the script first. For me to not get bored in four years conveys a strong conviction that 'boss, film mein kuch toh hai' (laughs). Otherwise generally hota kya hai that films don't last this long for you; saat-aath mahine mein interest khatam ho jaata hai. In that perspective, Roy stayed on with me, just as was the case with Raajneeti where it came to me five years before it was actually made.

What is that inherent element that kept you going?

The characters here are very layered. Moreover, emotional graphs are such that there are numerous moments where you are just looking and even that says so much. Moreover, for a director to have that kind of clarity to narrate a scene in such a way is something that impressed me too. Vicky has so much thehrav and maturity in his narrative style. He has managed to create poignant moments in the film without overdoing anything. To create and invoke that kind of emotion needs a clear mindset.

The film is said to be a hardcore dramatic affair with a suspense angle woven in as well. Do you wish to elaborate?

The suspense is what keeps the thrill aspect on. As for the genre, I don't know where and how to define it. There is romance, drama, a beautiful love story, music, evolution, growth and journey of all the characters, undercurrent of a lot of darkness, suspense, music - everything thrown in. The story has varied characters that are very manipulative. All of these angles make for an intriguing affair.

In fact the film is arriving on the weekend of Valentine's Day. Considering the fact that the film has a strong romantic angle to it. there couldn't have been better release timing, right?

There is a win and a lose situation. Even though it is Valentine's Day tomorrow, there is India v/s Pakistan World Cup on Sunday (laughs). Having said that, we are a solo release, so that's good. See, today there are so many films coming out week after week that you can't think too much about such advantages and disadvantages. All that matters is to keep audience excited enough to come and watch your film. Let the fact be stated, it isn't easy to bring people out of their homes. Ticket prices are not cheap. People want to spend only if there is promise of entertained. Roy offers that.