Manikarnika – the Queen of Jhansi is based on the life of the fearless warrior Rani Lakshmi bai. Zee Studios’ and Kamal Jain's film, that showcases Rani Lakshmi Bai’s extraordinary journey, has some of the best action/war sequences that will be witnessed in Indian cinema. From a massive crew, real weapons from 1857 to heavy armoury mixed with hi-octane stunts – the film offers a true visual spectacle for the audience. 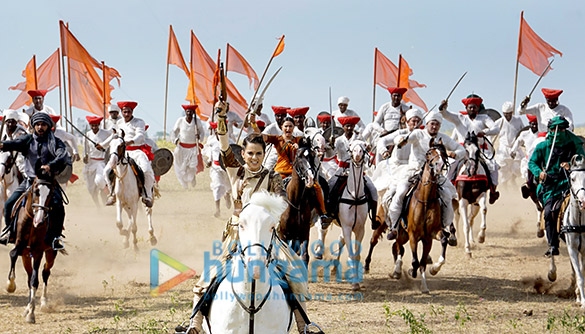 Nick Powell, the well-known international action director auditioned over 1000 fighters for the action sequences in the film. From which, he chose the best two hundred for training. Once these two hundred were trained, they further trained two more hundred. Not just that, even the horses used in the film were trained for the action scenes. The entire crew trained for about 4 months to prepare for the epic war scenes in the film.

Talking about the action in the film Kangana says, “Rifles were new for people at that time, and only a few used them. While the British army used Enfield rifles, Rani Lakshmi Bai preferred swords. I was fascinated with those 150-200-year-old authentic weapons we used in the film that were used in 1857!

The action sequences were quite intense but that did not deter anyone from giving their best. The shield I used weighed around 5 kgs. The entire team started getting ready at 3 AM, set up would take 6-7 hours so we would shoot only about 1 or 2 shots a day."

Manikarnika: The Queen Of Jhansi will release on January 25, 2019.

Kangana Ranaut - "We have tortured…

VIDEO: Kangana Ranaut does not want to miss…