Gangubai Kathiawadi has reached fans far and wide with Netflix. Directed by Sanjay Leela Bhansali and starring Alia Bhatt, the film has garnered incredible love, praise and appreciation from fans for its powerful storyline, spectacular performances and style of filming since it's release in February 2022. But, it has gotten even more attention since its premiere on Netflix on April 26, 2022. Within a week, Gangubai Kathiawadi became No. 1 Non-English film on Netflix globally. The film has been watched for 13.81 million hours and has featured in the Top 10 in Films in 25 countries across the world, including Canada, United Kingdom, South Africa, Australia, New Zealand and UAE. Interestingly, it's becoming a sensation amongst Thailand celebrities including F4: Thailand star Cindy Sirinya Bishop. 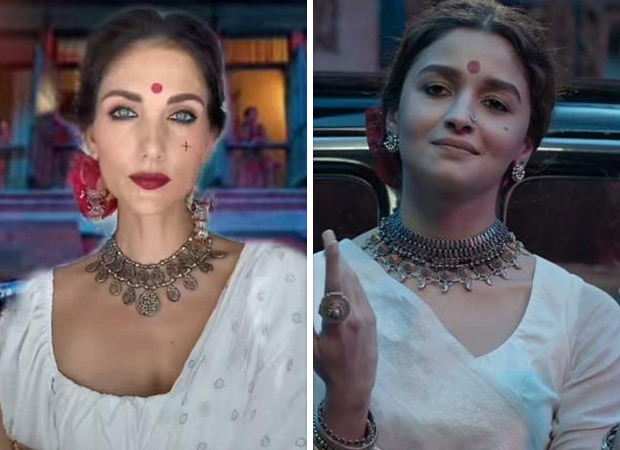 Taking to her Instagram account on Wednesday, Cindy Sirinya Bishop recreated Alia Bhatt's iconic white saree look with similar make-up and stance. The popular Thai drama actress, who has one-quarter of Indian roots too from her mother's side, praised Alia's performance and the film altogether in her post. "My cover of Gangubai, inspired by the hit film on Netflix at the moment, in one of my favorite scenes where she’s inviting to take her lover for a ride in newly acquired car," she wrote.

She continued, "Beyond the epic sets, visually captivating scenes, stunning performances by @aliaabhatt and cast, which has fascinated so many of us here in Thailand, promoting many to take to social media to do their versions of the main character #gangubaikathiawadi this film brings to the forefront the much contested arguments about prostitution vs sex work and reveals the brutality of the sex trafficking industry, then and now, and the unending cycle of violence and abuse those in marginalized groups have to endure."

"If you do watch the film, I hope it inspired you to think more on the issue of consent, the right of a woman to choose what she does with her own body, the right to safety and to education, and the right for everyone regardless of gender, race, religion or social caste to live life with dignity and respect. Kudos to the team behind this project for bringing these issues to light," she concluded her post.

Interestingly, in an exclusive interview with Bollywood Hungama, Cindy Sirinya Bishop had revealed she had watched Tovino Thomas starrer Minnal Murali. "We just watched this Indian film Minnal Murali on Netflix. I love that story. I watched it with the family and was like ‘Oh my gosh, guys, we have to watch this.’ It's an Indian superhero. We watched the trailer and my son loves it. Even the other day, he was saying ‘I want to dress up like Minnal Murali’. It was so entertaining, and we have no problem watching it. It was mostly in subtitles, anyway. So I think , with the internet, now there’s so much more access to different shows. It's great for diversity," she said.