Priyanka Chopra and her whirlwind romance with Nick Jonas has been in news for a while now. The duo, reportedly, began dating in the month of May this year. Not too long ago, the couple got engaged. The singer-actor was in India this past weekend with his parents to make the engagement official with roka ceremony followed by a bash. Nick and Priyanka even took to their social media to share some moments from their roka ceremony and made it official. As one could see the massive Tiffany & Co ring on her hand, one can't stop swooning over it. 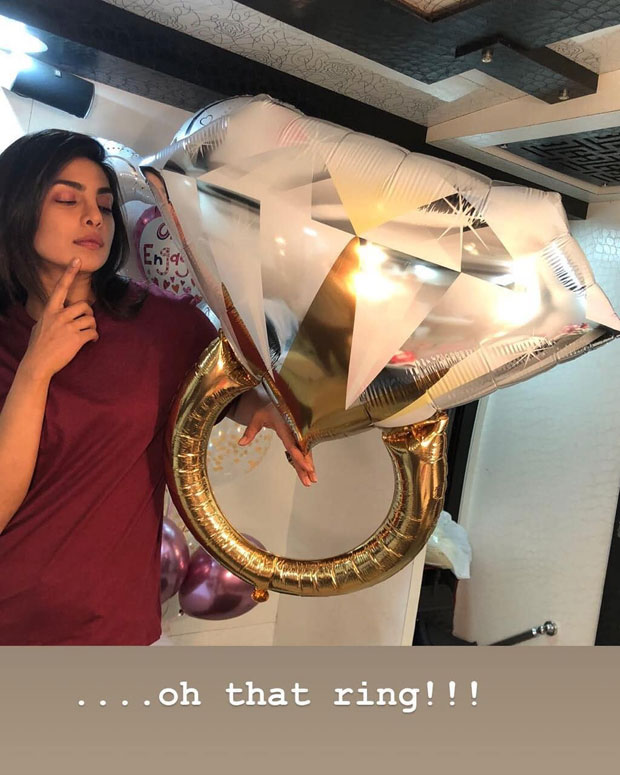 But, the actress has received an even bigger ring. In a playful moment and after returning to work, Priyanka shared a photo of herself sporting a larger-than-life ring—but wait for it- it is just a balloon. "....oh that ring!!!" she wrote on the Instagram story. It seemed like her team members surprised her with the balloon as the celebrations continue for the newly engaged actress.

Meanwhile, on the work front, Priyanka Chopra wrapped up Hollywood flick Isn’t It Romantic alongside Adam Devine, Rebel Wilson, and Liam Hemsworth. The film is scheduled for Valentine’s Day release next year. She is also starring in Shonali Bose’s tentatively titled The Sky Is Pink with Farhan Akhtar and Zaira Wasim. Besides these two films, she has booked a leading role in Hollywood film Cowboy Ninja Viking opposite Chris Pratt.