Kartik Aaryan and Janhvi Kapoor will be sharing screen space for the first time in the Dostana sequel. Dostana 2 will also mark the debut of TV actor Lakshya and will be helmed by Colin D'cunha. 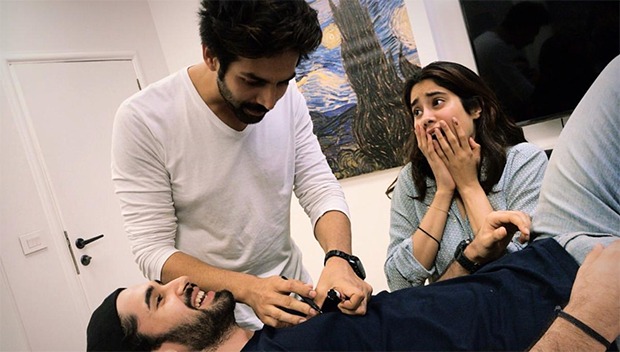 On Monday, the trio visited Karan Johar's office to begin the prep session for the film. Colin D'cunha shared a photo on his Instagram story where the three of them were just goofing around. Kartik teamed up a white t-shirt with beige pants whereas Lakshya wore a black sweatshirt and denims. Janhvi kept it casual in a light blue shirt, denim and white sneakers.

Dostana 2 is slated for 2020 release. The original film was directed by Tarun Mansukhani and released in 2008. It starred Abhishek Bachchan, John Abraham and Priyanka Chopra in lead roles.