We all know that the situation is currently sensitive when it comes to sexual harassment. The Me Too movement has taken down careers of many Bollywood stars owing to the sexual harassment allegations against them. And while the world is looking at making the society less sexist, indicating otherwise even in humour may backfire badly. Something similar happened on the sets of the reality show Rising Star, as judges, Neeti Mohan, Diljit Dosanjh and Shankar Mahadevan invited some heavy trolls when they pulled off a sexist prank! 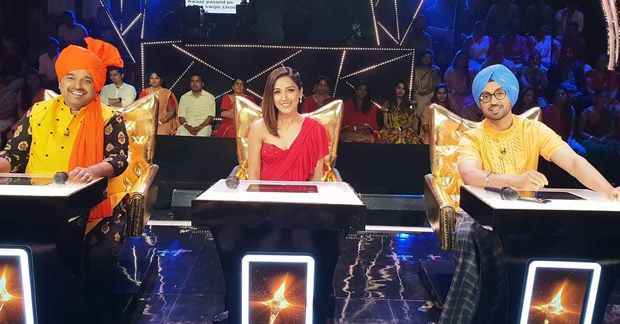 The episode featured two contestants Kunal and Shikar who were standing in front of the judges and introducing themselves on the show. During the same, Kunal went on to say that, ‘Shikar finds Neeti ‘rapchik’ and ‘kadak’.’ In the generation, where many of them are fighting against the degrading words used to objectify women in songs, these words too are expected to fall into that category. Reacting to these comments, Neeti looked visibly upset and angry over the words that were used.

The singer condemned and lambasted on the contestants saying, “You guys are on national television and this show doesn’t allow anyone to talk like this. Do you think this is casual? I am here representing all the women around the country and I don’t allow this.” She added further that she will let only Kunal perform since Shikhar had apparently used these words to describe Neeti backstage. She was backed by her co-judges, Diljit Dosanjh and Shankar Mahadevan who too termed these words as, ‘cheap and disgusting.’ But the entire situation changed when the three judges burst out laughing eventually. While the contestants were relieved that all of this was a prank pulled by the celebrities, the rest of the world was quite angry, we had say!

Social activist Kirthi Jayakumar slammed the judges in a series of tweets on her handle and received support from many of them. She felt that, in an era, where we are taking Me Too movement seriously, this entire prank defied the intention behind the whole campaign. Here’s a glimpse of what she wrote on Twitter:

Absolutely appalled at how @neetimohan18, @diljitdosanjh, @Shankar_Live and the rest of the crew literally threw the #MeToo movement under the bus on @ColorsTV. Speaking up about sexual harassment is not easy, and here you're all belittling it as "mazaak".

Terrible that @neetimohan18 says that she represents all girls on the stage, and then threatens to walk out in response to what is clearly inappropriate and verbal sexual harassment, and then proceeds to laugh at how it is all a prank. Seriously, sexual harassment is not a joke.

And now @diljitdosanjh apologized to them!! @Shankar_Live says it was a prank by one contestant on another. Thanks to how casually you all treat an issue so serious, there is ZERO accountability in this industry for sexual harassment.

I truly hope you all introspect and think about how you've undermined such a grave issue. You've completely disrespected the emotional labour it takes to fight harassment, to speak up and to seek redress. You've reduced it all to a joke @neetimohan18 @Shankar_Live @diljitdosanjh

Also Read: “To be the first turbaned Sardar at Madame Tussauds is a big deal” – Diljit Dosanjh