Veteran actor Dharmendra on Tuesday shared a cozy photograph of his Rocky Aur Rani Ki Prem Kahani team. In the photo, the 85 year old actor is accompanied by Shabana Azmi, Alia Bhatt, Ranveer Singh and director Karan Johar, as they pose in front of Qutub Minar. 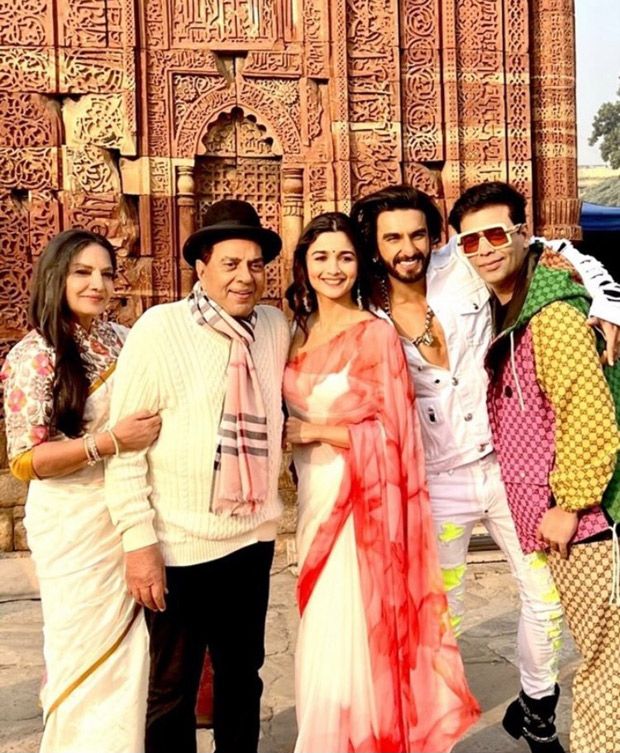 Wearing a white sweater, black denims, scarf and hat, Dharmendra looked handsome. Shabana in a white saree stood on his right, while Alia stood comfortably beside him on the other side, looking pretty in her white-red floral saree. Ranveer too is dressed in all-white as he flashes his brightest smile to the camera, while KJo turns heads with his Gucci look.

“Dosto, pyaar Mohabbat izzat itni milli sab se….pata hi nahin chala main nayi unit ke saath kaam kar Raha (Friends, got so much love, affection, and respect from everyone that I didn’t realize it is my first film with this unit),” Dharmendra captioned the post.

Recently in an interview, Dharmendra had praised young stars Ranveer Singh and Alia Bhatt. He said that Ranveer looks so natural in all his films. He is a sweet child. He later complemented Alia for her brilliant work.

This Monday, Alia Bhatt announced the release date of Rocky Aur Rani Ki Prem Kahani which is produced by Dharma Production. It will hit screens on February 10, 2023. The announcement was accompanied by a video, showcasing the montages of some behind-the-scenes clips. We got a peek into Dharmendra, Ranveer Singh, Jaya Bachchan, Shabana Azmi and Alia Bhatt’s characters as Karan Johar directs them.