John Abraham is currently under immense pressure and no points for guessing, the reason is indeed Parmanu – The Story of Pokhran. However, that hasn’t stopped the actor from moving on with other projects. While John is still seeking legal redressal for the Parmanu controversy, the actor continues his work on his other film Satyameva Jayate. 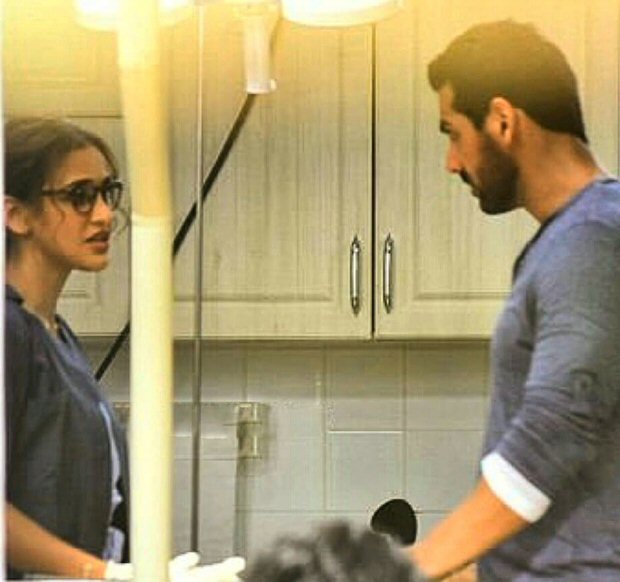 Let us jog your memory and remind you that we had reported about Satyameva Jayate after the producer of the film Nikkhil Advani shared about it on social media. Moving on, now we have a picture that was clicked whilst filming a serious sequence. The said scene was being shot between the leading lady Aisha Sharma as well as the hero of the film, John Abraham.

It is a known fact that Aisha Sharma will be making her Bollywood debut with Satyameva Jayate after her modelling stints and South films. The film is also said to feature Manoj Bajpayee in a prominent role. In fact, just a few weeks ago, the poster that was shared by Nikkhil Advani featured John and Manoj in an intense shot.

Although not many details have been divulged as yet, we hear that the film is a thriller featuring many action sequences. It has also been said that the team of the film had requested Aamir Khan to lend the title for the film since the superstar held the rights for it. For the uninitiated, Khan has a popular reality show called Satyamev Jayate that deals with social issues and stigmas. Owing to their request, Aamir too obliged for his colleagues.

Directed by Milap Zaveri, Satyameva Jayate is keeping up with its patriotic title and theme and is slated to release on August 15 this year.

As for Parmanu – The Story of Pokhran, the last thing we heard was that John has filed three complaints against his co-producer Prernaa Arora for non-payment of dues. The actor has also gone ahead and released a poster of the film but without giving any credits to KriArj. It is yet to be seen that despite all the drama that unfolded, will the makers be able to retain the release date of Parmanu, which is May 4 this year.