The world's most significant figures in fashion and pop culture met on Saturday to celebrate The BoF 500, the definitive list of those influencing the global fashion industry, presented by Snapchat, at the Shangri-La Hotel in Paris. Guest origins ranged from the United States and Italy to India and Malaysia. The sole Indian actress to represent her country at the BoF 500 Gala was Deepika Padukone. 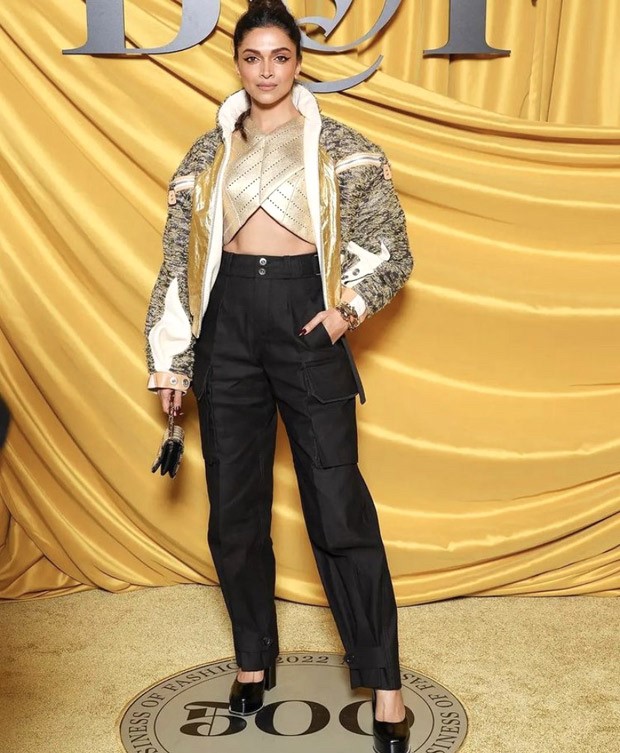 Deepika Padukone is having a great year! She has accomplished yet another new milestone after being named a member of the Cannes Jury at this year's festival and after becoming the first Indian brand ambassador of luxury label Louis Vuitton. She arrived completely covered in Louis Vuitton. She wore a black cargo skirt and a golden crop top with an inverted hem. She added a whimsical, printed jacket as a layer to the ensemble. The jacket has a fur lining and large zippers on the sleeves. Deepika accessorised the look with a pair of black Mary Jane heels.

To allow her outfit take centre stage, Deepika eliminated jewellery and carried a little black bag as the accessory. She chose bold black eyeliner, defined brows, a lot of blush, and neutral lipstick for her makeup. She had her hair half-up in a bun.

Based on their leadership, creativity, innovation, and effect across eight categories—Designers, Executives, Media, Retailers, Entrepreneurs, Creative Class, Models & Muses, and Catalysts—BoF has brought together a global community of the fashion industry's most prominent people since 2013. More international guests than ever before walked the red carpet at the BoF 500 Gala this year.

Meanwhile, on the work front, Deepika has many interesting films in her pipeline. She will next reunite with Shah Rukh Khan for Yash Raj Films' action film Pathaan alongside John Abraham. It will hit theatres on the 25th of January, 2023. She will soon star opposite Prabhas and Disha Patani in Nag Ashwin's directorial Project K. Apart from this; she also has the American comedy film The Intern co-starring Amitabh Bachchan and Siddharth Anand's action film Fighter with Hrithik Roshan.

A post shared by The Business of Fashion (@bof)