Aishwarya Rai Bachchan and Abhishek Bachchan‘s little munchkin Aaradhya Bachchan turned 7 years old last week. The little one ringed in her birthday with grand birthday bash which was organized by her famous parents which saw many celebrities with their toddlers. One of the guests was little AbRam Khan who came to the party sans his parents. 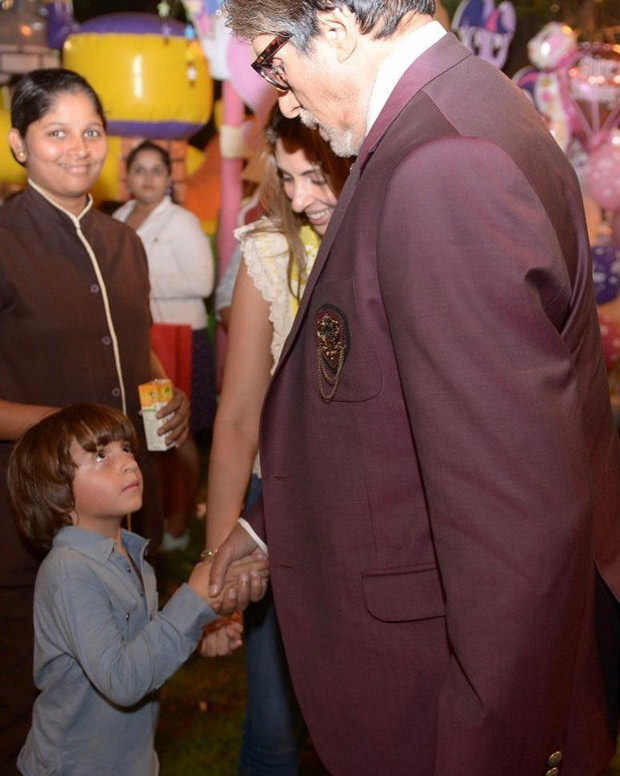 As the little one enjoyed the night to the fullest, Amitabh Bachchan shared one of the priceless moment. AbRam was seen sharing a handshake with the megastar in the picture. In the past, time and again, SRK has said that AbRam thinks that Amitabh is SRK's dad due the films that he has watched previously. Telling a similar story, Amitabh wrote, "and this be little Abram, ShahRukh’s little one .. who thinks , believes and is convinced beyond any doubt, that I am his Fathers FATHER .. and wonders why Shahrukh’s father does not stay with him !!!"

Amitabh had shared images of AbRam from Aaradhya's 6th birthday last year, too with Shah Rukh Khan. “And as for this little bundle .. he wanted the fluffy ‘buddhi ka baal’ cone .. so we took him to the stall made one for him and the joy of getting it is just priceless .. Abram, jr Shahrukh .. delectable !!” Amitabh had written. To this, SRK had responded, “Thank u sir. This is a moment he will always cherish. By the way he thinks u r my ‘papa’ when he sees u on TV,” SRK had written.

On the work front, Amitabh Bachchan will be next seen in Ayan Mukerji directorial Brahmastra starring alongside Alia Bhatt and Ranbir Kapoor. It is set for Christmas 2019 release.