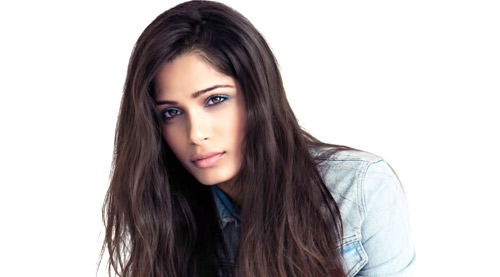 While interacting with a group of journalists at IIFA yesterday international star Freida Pinto was asked about Salman Khan's 'rape comment' by a TV reporter. Bollywood Hungama's Faridoon Shahryar added that Salman had regretted two seconds later after having made the particular comment but it is not being highlighted. Freida Pinto gave a very interesting and well balanced answer.

TV Reporter: There is a huge furore about the comment that Salman Khan made - He said after training he felt like a woman who has been raped. This comment has created a lot of controversy back home. Do you think stars need to be more responsible when they speak because they are stars and every word of theirs is criticized?
Well it goes two ways, the context in which Salman Khan said something is very important as well. Sometimes I feel (and this is not about this particular comment) some people might say something that's not really wrong. We do come from a kind of a little bit of set-culture where it does irk us in ways that probably are blown out of proportion - but not this one in particular, because I actually took offense as well. I feel there's definitely a sense of responsibility that comes with it (the stardom) and it's important at that point of time for whoever that person is to feel responsible enough to either clarify and apologize or stand the ground if they did say something right.

Faridoon: 2 seconds later he regretted the same thing...
Most people do regret who know they said something wrong.

Faridoon: That has not been highlighted actually.
Which is unfortunate, right? That's the job of the media to make sure if someone does say something wrong and they want it, and they see that they're being honest about it so highlight that part as well. You know I'm not going to always say the right thing at the right time. After a long tiring day I wouldn't say something like that ever but I might say something that could be misinterpret.

TV Reporter: You just said that this comment offended you?
I feel when you first read it as a woman, when you read something like that, it's like it jumps out as a bit of shocking statement. But as you're saying, if someone did apologize, highlight that as well.

Faridoon: Yeah, because it has been conveniently ignored, which is unfortunate.
Yeah, you know what, people can go in all kinds of permutations and combinations whenever it something like this comes and everybody wants to analyze it, so instead of focusing on what just one person said, let's focus on issue at hand. Is rape not something that happens in our country? Focus on the fact that. Why does it happen, why has the mentality of how women and girls are valued not changed? Let that be a conversation starter for something much bigger and much more important that's happening in our country today.