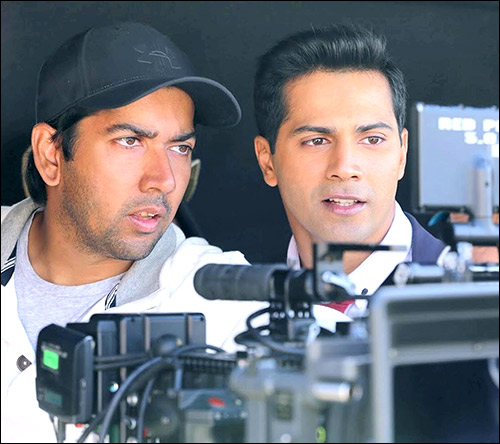 Varun Dhawan is starring in his brother Rohit Dhawan''s action-comedy Dishoom. Varun Dhawan, who is currently on the promotional tour for the film, has been sharing photos from the shoot days.

A behind a scenes photo was shared by Varun Dhawan with his brother Rohit Dhawan with a caption, "#dishoomdiaries behind the scenes in Abu Dhabi." The photo was taken during their Abu Dhabi schedule. As the lead actors John Abraham and Jacqueline Fernandez are busy with their other films, they will join Varun Dhawan for full-fledged promotions in the month of July.

Directed by Rohit Dhawan and produced by Sajid Nadiadwala, Dishoom is a story about John Abraham as Kabir Shergill and Varun Dhawan as Junaid Ansari, two special task force agents who team up for a 36-hour manhunt. The film also features Jacqueline Fernandez, Nargis Fakhri, and Saqib Saleem and set to release on July 29.