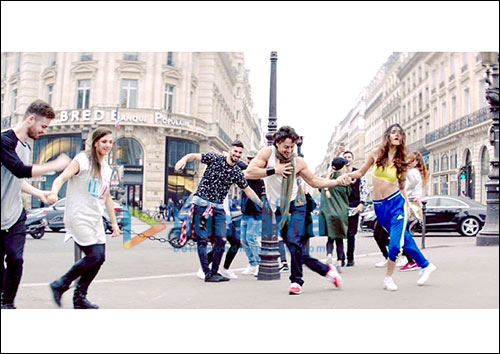 Earlier we had given several glimpses of the music video 'Befikra' starring Tiger Shroff and his alleged girlfriend Disha Patani. This romantic video was shot in Paris and here's yet another picture from the same.

Tiger Shroff shared this picture on his Instagram page where he is seen dancing with model turned actress Disha Patani on the streets of the picturesque Paris. Directed by Sam Bombay, 'Befikra' is composed by Meet Bros and the teaser of the same was released recently. The said video has been shot in several beautiful locations of the French capital including the famous, Eiffel Tower.

Prior to this, Tiger has starred in a few other music videos like 'Zindagi Aa Raha Hoon Main' and 'Chal Wahan Jaate Hain' alongside Kriti Sanon