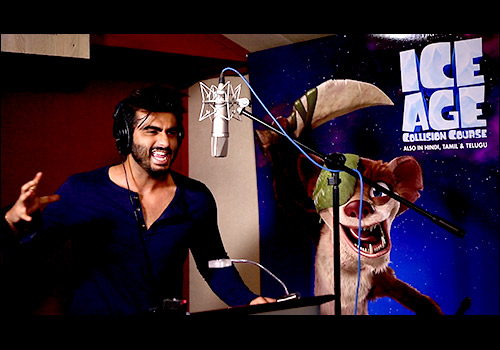 Apart from working in films, several actors from Bollywood have taken an interest in voice-overs. Arjun Kapoor is the latest actor to join the voice-over bandwagon.

Arjun Kapoor has made his voice-over debut in Hindi version of Ice Age: Collision Course. He has lent his voice to the character named Buck, a weasel. Arjun Kapoor has imitated several actors from the industry including his uncle Anil Kapoor. It is reported that he has used Anil Kapoor's catchphrase 'Jhakaas' in the animated film. He has also imitated Arshad Warsi and Sanjay Dutt's famous characters Circuit and Munnabhai.

Yash Raj Films talent shared a picture of Arjun Kapoor dubbing the studio. They wrote, "This is what @arjunkapoor had to say about his first VO experience: I chose to give my voice to the character of Buck in the Hindi dub of Hollywood adventure 'Ice Age: Collision Course' because he is loud and totally filmi. I've always been drawn to animation films. It brings out the child in me. Opening my mind to the thought of doing a voice-over was quite thrilling. You get to say the lines that you may not be able to say otherwise. I decided to have fun with it."

As of now, Arjun Kapoor is filming for a love story tilted Half-Girlfriend opposite Shraddha Kapoor which is set to release next year.