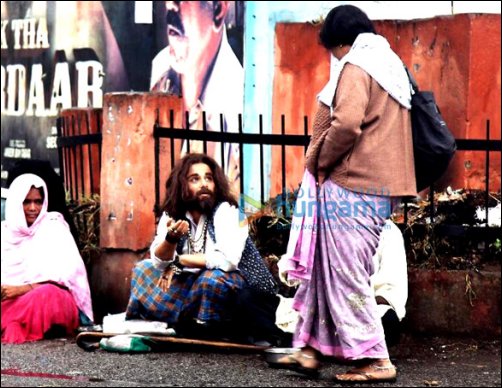 We generally say the famous adage 'Is it a bird, is it a plane... No! It's Superman!' Well, the adjoining picture will surely change the saying to ...'Is it John Abraham, is it Aamir Khan... No! It's Vidya Balan! Well, this picture that defies all the odds belongs to none other than the gorgeous woman Vidya Balan.

She appears in this avatar in one of the quintessential scenes in her forthcoming film Bobby Jasoos outside a railway station in Hyderabad. Reports have it that while she was sitting in this attire, a lady who was just passing by stopped at her and not only gave her some money but also gave her a sound piece of 'advice' and to why beg when you can work and earn! This only establishes the authenticity of Vidya to her character! If this is such a trailer of the things to come, one wonders how the full fledged film will be!

Talking about the film Dia says "The idea of Bobby Jasoos was born over a year and a half ago! Today, blessed with an ideal cast and fantastic crew we are ready to roll and nothing gives me more pleasure!!! The actors have been busy in workshops, readings, look tests and their enthusiasm and excitement is palpable. Vidya has ably led from the front and her dedication to preparing for this part is evidence to the fact that she is an actor who continues to respects the craft and is hungry for more despite achieving so much already. I can't wait for Bobby to be unleashed!!! "

Adds Sahil, "When each artiste and crew member approaches their role in the making of a film with a sense of ownership and selflessness, an enviable energy is born and that usually results in an extremely memorable experience and film. We are ready to give it our best and are confident that the audience will find Bobby Jasoos to be well worth the short wait"

While Bobby Jasoos is being produced by Dia Mirza and Sahil Sangha, it's being directed by Samar Shaikh and stars Vidya Balan and Ali Fazal in the lead. The film is headed for a 2014 release.