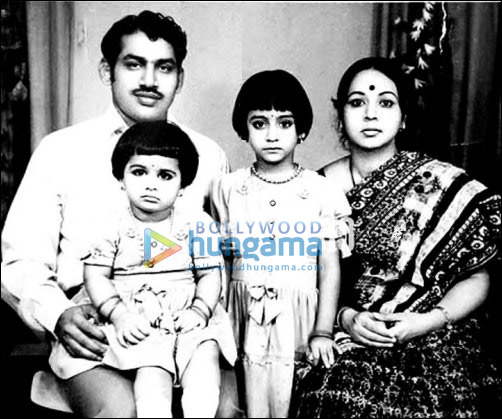 Vidya Balan is surely the talk of the town courtesy her phenomenal performance as Silk in the just released flick The Dirty Picture. Even as the BO windows are buzzing with excitement post the release of The Dirty Picture, Bollywood Hungama chanced upon a very cute childhood snap of this heroine. Needless to say, that the baby on the lap of the father is indeed a cutie pie to the core.

Not many are aware of the fact that, Vidya, who holds a Sociology degree, can fluently speak in Tamil, English, Hindi, Malayalam as well as Bengali. It was when she was doing her MA from Mumbai University, she was offered a role in a Malayalam film titled Chakram with the southern superstar Mohanlal. However, the project was shelved mid-way. And then it was the ace director Pradeep Sarkar, who spotted her and offered her the leading role in Parineeta, for which Vidya had to go through 40 screen tests and 17 make-up shoots before she was finally chosen for the lead role in the film!.