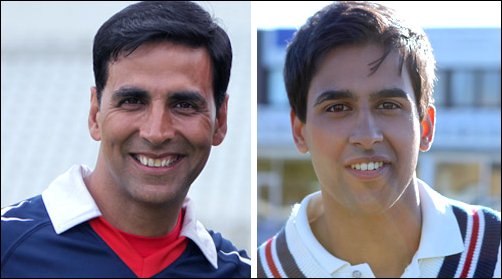 In the forthcoming biggie Patiala House, viewers will get to see a young Akshay Kumar as well. Yes, a young actor named Usman Qureshi who bears an uncanny resemblance to the superstar will seen playing a teen Akshay in the film.

Apparently, director Nikhil Advani was on hunt for a young guy who would play the role of 17 year Akshay Kumar in his film Patiala House. It seems that was quite a long hunt as under no circumstances he wanted to compromise.

However, when he met Usman Qureshi, he was stunned by the similarity and Usman was on board in the first meeting itself. It seems the resemblance between Usman Qureshi and Akshay Kumar was so prominent that the entire team was thrilled to have him on the sets and gifted him with a special nick name 'Akki Junior'.

Producer Bhushan Kumar says, "We were completely bowled over by the striking resemblance between the two- Akshay and Usman. And after the screen test, without a doubt we found our 17 year old Akshay for Patiala House in Usman. It is not easy to play a younger role of such a superstar but Usman has done a great job."

Akshay Kumar was equally surprised and excited on seeing the resemblance and they also discovered that they had a common scar on the eyebrow. Akshay even admitted that his body structure and body type was quite like Usman when he was 17 years old.

Looks like viewers will indeed be in for a treat as they get to see both Akki Senior and Akki Junior in Patiala House which releases all over, this Friday, Feb 11, 2011.