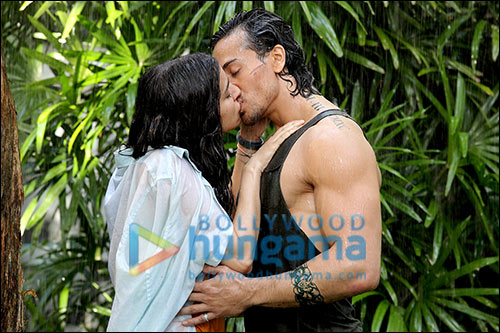 Tiger Shroff, who was last seen in his debut film Heropanti, is all set for his second Bollywood venture, Baaghi. The film that has him sharing screen space with his school mate Shraddha Kapoor is a love story and will be filled with several romantic moments. Here is a glimpse of one of the many passionate moments in the film, where Tiger is seen in a steamy liplock with his co-star Shraddha Kapoor.

Dressed in a black vest, Tiger is seen passionately embracing his onscreen ladylove, who has his shirt draped around her, as they share a kiss in the rain. While their sizzling chemistry is quite visible in this picture, Sabbir Khan isn't surprised to see it as he maintained that his leads displayed such a brilliant chemistry since the first day of the shoot. "We shot it sometime last year. Tiger and Shraddha share a great rapport having known each other since their school days and were really comfortable with each other. I noticed the comfort they share during our reading sessions and decided to tap it. They look amazing together," said the director, adding that the unit filmed two romantic sequences in Kerala and Thailand.

He also further clarified that there was no awkwardness between the two as he said, "Not at all! They are both thorough professionals. Thanks to the reading sessions, they knew the script well and we had a blast on the sets. They even helped each other during difficult scenes, be it action, dance or emotional ones."

Also maintaining that Tiger never had any inhibitions in doing initimate scenes if the script required, "If I know him well, he'll do anything if the script demands it," Sabbir asserted.

Baaghi featuring Shraddha Kapoor and Tiger Shroff is produced by Sajid Nadiadwala in association with UTV Disney and is slated to release on April 29.