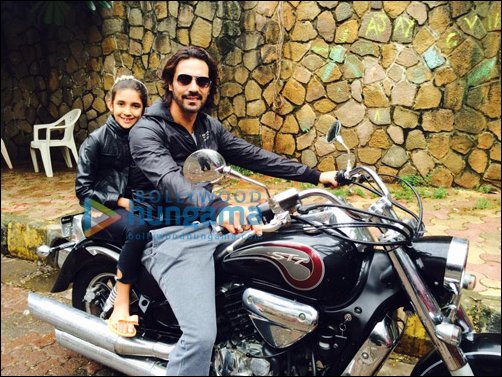 Arjun Rampal who was last seen in Prakash Jha's political drama film Satyagraha has been missing from the big screen. The actor who will next be seen in the currently underproduction Roy, posted candid images of himself and daughter Myra on twitter.


Tweeting the images, Arjun says, "The biker duo ....what say? Do we make a good pair?" later adding another picture, this time in colour, he posted, "One more in color. Myra and I enroute for haircuts to Alims."

Though currently the actor may be enjoying his free time with his daughter, his next release Roy is said to be a romantic action thriller directed by debutante Vikramjit Singh and produced by Bhushan Kumar, Krishan Kumar, Divya Khosla Kumar & Freeway Pictures and co-produced by Ajay Kapoor. Roy that also features Ranbir Kapoor and Jacqueline Fernandez in lead roles is slated to release on February 13, 2015.