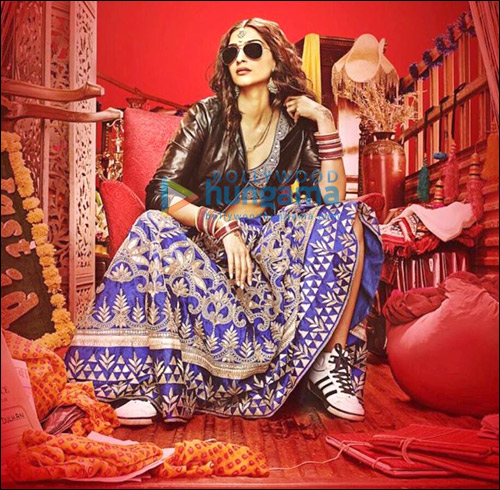 While her last film Khoobsurat had Sonam Kapoor sporting quirky outfits that represented her free spirited character of Mili in the film, we get to see yet another whacky side of the actress in her upcoming film Dolly Ki Doli. This Arbaaz Khan production will have the leading lady romancing three men and here is presenting the first look of the film.

Since it revolves around the protagonist 'Dolly', the first look has only Sonam Kapoor dressed in a lehenga, danglers and maang teeka but it is the jacket, sneakers and shades that doesn't fit into the quintessential bridal look. What also grabs our attention amidst the colourful background is the 'mangal sutra' and 'chuda' that Sonam is wearing which is often sported only by married women. As the film's title suggests, the film is about Dolly and her 'doli' (marriage) and the three suitors who are out to impress the girl are Rajkummar Rao, Pulkit Samrat and Varun Sharma. What we also hear is that Sonam Kapoor's character in the film is not only carefree and independent but she is also a fraud who cons men into marrying her, only to flee with their money on the wedding night.

Directed by Abhishek Dogra, Dolly Ki Doli was supposed to release on February 6, 2015. However, the makers of the film are now contemplating on changing the date in order to avoid clash with other big projects. We believe that they are eyeing on January 30 as the release date, considering no other films have been scheduled to release that day. Dolly Ki Doli is also said to have an impactful cameo by Saif Ali Khan and Malaika Arora Khan too will be gyrating to an item number in her husband's production.