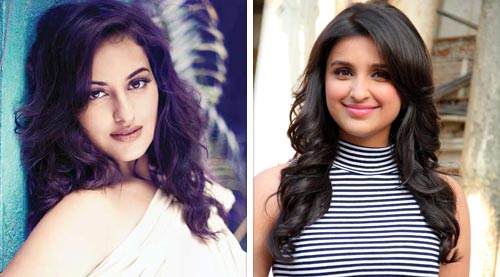 If you think Alia Bhatt is the only one who will give it back to her critics after she got flaked for her so called 'brainless' antics, then you have yet another actress who took to Instagram in order to give a piece of mind. Sonakshi Sinha recently decided to respond to the ones who frequently comment about her weight in her own style.


In the glamorous world of Bollywood, the body figure of an actress is often the talk of the town. However, amidst the popular belief of thin and slim actress, Sonakshi Sinha is happy flaunting her voluptuous body. Though she has no qualms in accepting that she is different from her contemporaries, she has been flaked often by the media and audience with them terming her as overweight.

It seems that Sonakshi Sinha recently lost her cool and she decided to take to her Instagram to vent out her heart and posted this picture of a skeleton. Also lashing out on the ones who keep commenting about her weight, she said, "To all those who keep commenting on my weight, whether its a full picture, or a close up where you cant see jack. Take a good look at this picture. Now get this: 1) this aint ever gonna be me. 2) get over it. 3) i wish u could see which finger i hold up for shallow and idiotic people like yourself."


But she is not the only one who has taken up to a social networking site to put her point of view across. Breaking away taboos of talking about menstruation, Parineeti Chopra answered back to a journalist sternly while promoting the brand Whisper recently at an event, when he claimed to know nothing about periods. Not just that, the actress also took to Twitter to talk about the way bold moves actresses have taken stand up against critics. "Deepika speaks against a demeaning article. Kangana rejects any fake awards. Anushka sportingly writes about her lips. Sonakshi shows a finger to the fashion police. I showed an ignorant (sex and periods) journalist his place. Actresses are not afraid to stand up to hypocrite journalists who demean them. They speak their heart and demand their respect!! GO GIRLS!!!" said Parineeti Chopra.