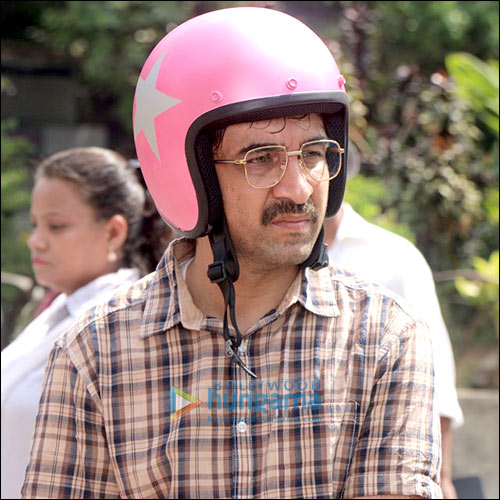 Siddhanth Kapoor, who was last seen in the critically acclaimed Ugly, will be seen playing one of the main characters in the upcoming Pia Sukanya directorial Bombairiya. While we last revealed the look of Radhika Apte, who sports a rather interesting combination of sarees and shoes in the film, here is a glimpse of Siddhanth Kapoor, sporting nerdy specs and a pink helmet.

Talking about his character in the film, Siddhanth says, "I am playing a delivery boy in the film who gets into shit because of a random accident that takes place." We have often seen Siddhanth sporting varied looks but this film has him in a completely different avatar compared to his other films. When quizzed about it, he says, "It's just the look of the moustache and little bit of tan."

Siddhanth Kapoor plays the role of a middle class man and if the first glimpse of his character is anything to go by, then he is also sporting a rather irritated expression on his face. Revealing the reason behind the same, Siddhanth adds, "He is on the run and he doesn't even know why. He's just going to deliver something but is stuck into this chaotic situation because of other stories."

What is also intriguing about the character is his pink helmet, quite rare for a man to wear it during a bike ride. According to Siddhanth, there is no back story behind it but just a way to recognize him amidst others. "There is no story behind the pink helmet. They just decided to use the pink helmet because in the film they had to be recognizing me in such a way."

However this is not the end of it. Apparently Siddhanth's character doesn't have a name in the film and he is often called as 'the biker'. "Honestly the name of my character hasn't been given yet. Because of the other stories in the film, there is no name for me. But all of them call the character, the biker."

Very few may be aware that Siddhanth Kapoor also suffered an accident whilst shooting for the film. Reminiscing about the incident, the actor mentions, "It was during one of the shots, I fell off the bike and it skid. I hurt my leg really badly but I still shot for 8 hours after that. I had an injury earlier and I fell on the same place again. It just enhanced and later, went to the doctor. Now its fine but I am still going through physiotherapy."

REVEALED: Siddhanth Kapoor’s look from the…