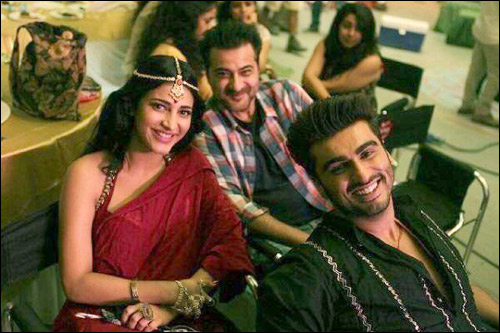 Shruti Haasan who's last Bollywood outing was the Nikhil Advani directed film D-Day will soon be seen gyrating in the upcoming Arjun Kapoor - Sonakshi Sinha starrer Tevar. In fact Shruti will be doing a special item number in the film.

The track titled 'Madamiya' will see Shruti Haasan dancing alongside Arjun Kapoor in the film. Apart from this it is also learnt that Shruti Haasan who is also a singer and composer has lent her voice to Sonakshi Sinha for a romantic number in the film.

Tevar which is a remake of the 2003 Telugu film Okkadu, is directed by Amit Sharma and produced by Boney and Sanjay Kapoor. The film that also stars Manoj Bajpayee is slated to release in January 2015.