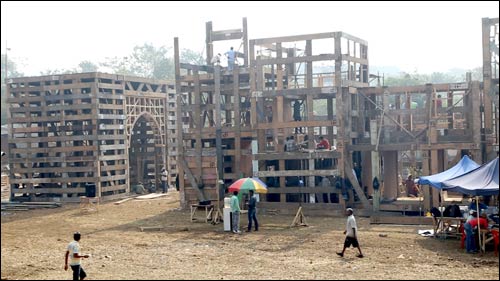 Excel Entertainment joined hands with superstar Shah Rukh Khan after the superhit series of Don and announced Raees almost a year ago. However, the film had fallen prey to many speculations and also faced a delay owing to the busy shoot schedule of Shah Rukh Khan. The actor decided to start the shooting of Yash Raj Film's Fan prior to this film. However, now Raees is finally all set to roll and a set for the same is being erected in Mumbai.

Raees is set in the 80's and based in Ahmedabad. Since a lot has been changed in the city in terms of architecture as well as the lifestyle, the team has to recreate certain areas of the town which represents that era. Hence, the crew headed by production designers Anita Rajgopal and Daniel Reagan have decided to recreate Ahmedabad in Film City, suburban Mumbai. Also, they have some action sequences which they would prefer to shoot indoors rather than on a real location. It is a massive set up and there is work going on around the clock. The team is looking into minor and intricate details and trying to ensure that the set is complete at the earliest.

Directed by Rahul Dholakia, Raees has Shah Rukh Khan playing the larger than life gangster and Pakistani actress Mahira Khan will be seen playing his love interest. On the other hand, the role of a cop chasing the superstar will be played by the renowned Nawazuddin Siddiqui.