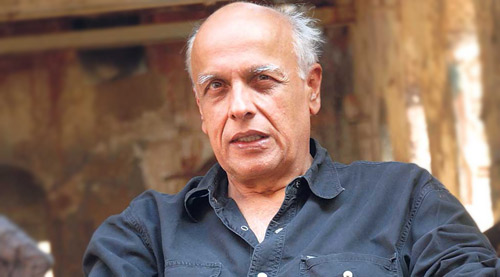 Never mind the below-par musical beginnings, when Mahesh Bhatt, despite being Nanabhai Bhatt's son (Nanabhai made many small movies with catchy music) and Raj Khosla's assistant (Khosla was one of Hindi cinema's most musical filmmakers ever), started out with mediocrity in the name of melody in his first three movies - Manzilein Aur Bhi Hain (1974), Vishwasghaat (1976) and Naya Daur (1978).

In his fourth film, Lahu Ke Do Rang (1979), Bhatt, feels that he truly got some good melodies out of Bappi Lahiri like 'Muskurata Hua' and the populist 'Chahiye Thoda Pyar' and others. Interestingly, both Mohammed Rafi and Danny Denzongpa who had collaborated on 'Mujhe Doston Tum Gale Se' in Naya Daur, also featured with better but separate songs on this soundtrack, like 'Maathe Ki Bindiya' (with Anuradha Paudwal singing for Helen!) and 'Humse Tum Mile'.

The 1980s: the Chartbusters Begin

It was from the 1980s that Mahesh Bhatt's musical era truly began. Initially, his music was primarily about Jagjit Singh, India's leading ghazal virtuoso at that time. This was also when Bhatt began his experimentation with intense emotions, starting with cathartic, almost autobiographical films, ventures that gave rise to some of cinema's finest lyrics in that period. It was in Arth (1983) that we heard the sledgehammer Kaifi Azmi song, 'Tum Itna Kyoon Muskuraha Rahe Ho / Kya Gham Hai Jisko Chhupa Rahe Ho' (Which sorrow are you hiding from me by smiling so much?) co-composed (with wife Chitra). The decade saw Bhatt and the Singhs collaborate further in Ashiana and Aaj, with Jagjit actually in the cast of the former, while the latter employed the 1982 Sudarshan Faakir-written masterpiece, 'Woh Kaagaz Ki Kashti', another immortal Jagjit number.

Needless to say, these are the songs that honed Mahesh Bhatt's taste and greed for excellent verse, which is reflected even in his latest films (he does not direct now) Citylights and Khamoshiyan. But more on them later: suffice to say here that even the 18th century legend Mir Taqi Mir's poetry and that of veteran Urdu poet Rajender Nath 'Rehbar' were used in Arth as well.

The simple pith-laden depth of the ghazal and such songs were what made Bhatt collaborate extensively with accomplished poets like Indeewar, Kaifi Azmi as well as the redoubtable lyricist Anand Bakshi repeatedly, with sterling results as long as these giants were alive.

In the 1986 Naam, Bhatt had his first real tryst with commercial glory with Laxmikant-Pyarelal, his boss Raj Khosla's favourites and the only composing entities then that had depth and weight as well as commercial viability. This time, the chartbuster was Pankaj Udhas' 'Chitthi Aayi Hai' which Anand Bakshi wrote by writing the end-rhyming words first and filling in the rest later to yield a cult, hard-hitting song.

With 'Chitthi Aayi Hai' topping India's first countdown show Binaca Geet Mala, the stage was set for a fresh round of - this time filmi - excellence. And if this song remains a must even three decades later at any Pankaj Udhas concert (and its powerful lyrics often make the singer's voice break during the rendition), in 1990, Rajesh Roshan (then a Bhatt favourite) came up with 'Aaina Mujhse Meri Pehli Si Soorat Maange' for Daddy, which is also a compulsion for singer Talat Aziz in his shows!

This completed the trilogy of great songs created for cinema in Mahesh Bhatt films that rank among the career-finest and biggest chartbusters of three ghazal masters - Jagjit Singh, Pankaj Udhas and Talat Aziz!

And soon, Mahesh Bhatt, who admitted once, "There must be some genius within me to spot potential!" and also that "I read a lot, so I understand the kind of poetry that is needed for the emotional depth and sensibility my films possess," became godfather to more musical talents, even percolating his sense of music and lyrics into protÃ©gÃ©s Mohit Suri (Ek Villain) and Anurag Basu (Life In Aâ€¦Metro, Barfi!) when they ventured outside the Vishesh Films fold.

And if Bhatt excelled in the ghazal-like domain, from the millennium, he even pioneered the Sufi-ana song in our films, though that genre has seen every juice squeezed out by now. Here is a list of the main musical talents that Bhatt nurtured in his films in the last 30 years.

Nadeem-Shravan, Sameer and Kumar Sanu: After Aashiqui, there was no looking back for this trio - together and individually. They simply reached the top of the heap and remained there for as long as their talents bloomed.

Anu Malik: Bhatt-saab took the talented composer's career out of the doldrums with Sir and Phir Teri Kahani Yaad Aayi in what became Hindi cinema's only successful comeback for a composer ever! And they excelled jointly, except for two or three films, all the way till Zeher in 2005, with highs like Naajayaz, Tamanna, Saaya and more.

Rajesh Roshan: It was in Kaash, Jurm, Daddy, Papa Kahte Hain and Dastak that Roshan scored the best in the '90s apart from in his brother Rakesh Roshan's films.

M.M. Kreem: The Bhatts "discovered" this true-blue South genius in Criminal and gave him follow-ups like Zakham and Rog.

Pritam: While Pritam had proved his market-friendliness in commercial entertainers, it was with Bhatt's Gangster and Woh Lamheâ€¦ that he was truly taken seriously as a weighty musician.

Mithoon: Today's successful composer-lyricist-singer first re-created Pakistani songs for the Bhatts in Zeher and Kalyug before debuting outside as composer.

Jeet Gannguli & Ankit Tiwari: Aashiqui 2 was the true breakthrough for Pritam's ex-partner after doing numerous small Hindi films. And Ankit got his first fame as composer after the flop Sahib Biwi Aur Gangster.

Rani Malik, Faiz Anwar, Qateel Shifai, Rahat Indori & Zameer Kazmi: These songwriters owed most of their best work to Mahesh Bhatt, who also gave them their breaks in Aashiqui, Dil Hai Ke Manta Nahin, Sir and Phir Teri Kahani Yaad Aayi respectively. Of course, Shifai had earlier written for some films but not made it.

Last but not the least, Bhatt also has played mentor to so many Pakistani talents, including Rahat Fateh Ali Khan (Paap) and Atif Aslam (Zeher) besides some lyricists and music.

In the next article, we will examine the musical milestones in his long innings.