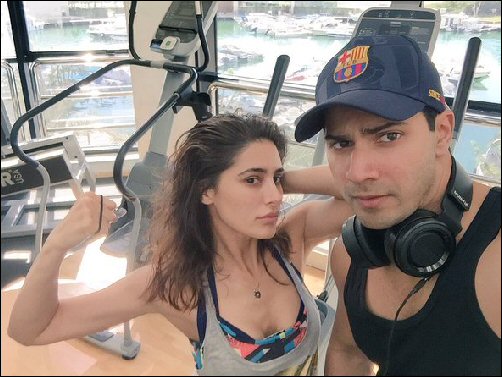 There have been speculations about Nargis Fakhri's special appearance in the upcoming action drama Dishoom for over a month. And now it is confirmed by none other than the leading man Varun Dhawan and the lady in question Nargis Fakhri who announced it on their Twitter handles.


Nargis Fakhri was recently spotted in Abu Dhabi working out with Varun Dhawan and their co-star Saqib Saleem. Welcoming her on the sets of Dishoom, Varun took to Twitter to not just post a picture but even captioned it saying, "Welcome to #dishoom @NargisFakhri #abudhabi takeover".

On the other hand, Nargis too shared a reply tweet over the same with a collage of her poses with Varun saying, "@Varun_dvn thanks". Though the special appearance is confirmed we are still unsure about her role in the film which is being kept strictly under wraps.


Varun Dhawan and Nargis Fakhri were previously seen together in Main Tera Hero. Dishoom stars Jacqueline Fernandez as the leading lady along with yet another male lead, John Abraham. Directed by Rohit Dhawan and produced by Sajid Nadiadwala, the film is slated to release on July 29, 2016.