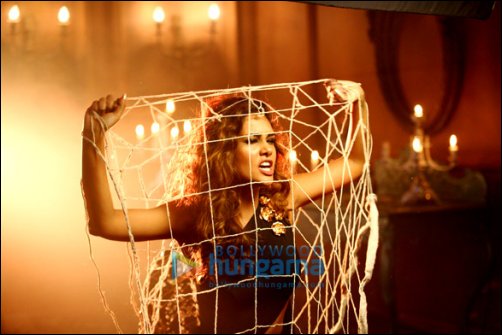 Earlier we had reported about Esha Gupta doing a promotional video for the upcoming Neeraj Pandey directorial Baby. The thriller that deals with the life of anti-terrorist officials was supposedly to be a film without any songs but in order to cash in on the musical success, the makers decided to add a promotional song titled 'Beparwah'.

Keeping up with theme of the film, 'Beparwah' has been promoted as an ode to the attitudes of the characters and Esha Gupta will be seen grooving to the track. Here's a glimpse of the actress' avatar in the number. The music of the track has been given by Meet Brothers and is directed by Sanjay F Gupta and sung by Apeksha Dandekar, lyrics has been penned by Manoj Muntashir, & choreographed by Abhishri Sen.


Produced by Bhushan Kumar, Baby stars Akshay Kumar, Rana Daggubati, Danny Denzongpa, Tapsee Pannu, and Kay Kay Menon among others and it is slated to release on January 23, 2015.