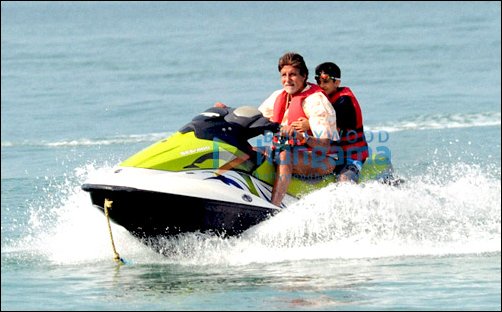 Goa is the place to be for most party-hoppers on New Year's eve and it's no different for our B-town citizens. This year too actors such as Priyanka Chopra, Shahid Kapoor and even Amitabh Bachchan were seen enjoying themselves at the most popular beach destination of India- Goa.

Amitabh even had his wife Jaya and grandchildren Agastya and Navya for company and must say the actor did play his role of a doting grandpa with much elan. The veteran actor even indulged in some water-sports at Benaulim beach at the behest of his grandchildren. Says Bachchan on his blog,"It happened! The early morning appointment with the kids and the sea and the jet ski's. They were ready before me! I thought they would sleep over, having travelled all the way from Phuket, Bangkok and Mumbai to get here the previous day. But no! The kids are on some other energy!

So off we went into the tempting waters and powerful jet ski's - Navya driving by herself and a trainer behind her, and me taking Agastya for a ride first and then giving him the ropes later. Brother and sister are keen competitors. Each wanting to outdo the other."