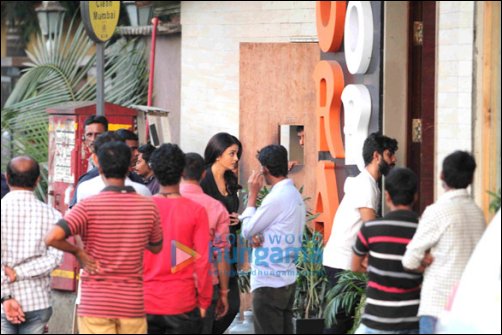 Aishwarya Rai Bachchan has been in the news for the past few months for her much awaited comeback film Jazbaa. Deviating from the clichÃ©d 'heroine' roles, Aishwarya will be seen playing a lawyer in this suspense thriller and the yummy mummy has also decided to perform action sequences in the film.


This mystery revolving around a court drama and a lawyer's struggle to punish the real criminal, has already gone on floors in Mumbai, after a long script reading session with the actors. Though Sanjay Gupta had recently maintained that he had prefer to start shooting within a studio until few days, we got a glimpse of Aishwarya Rai Bachchan near a renowned pub in Mumbai along with co-star Irrfan Khan, shooting for the film. Minimal make-up and an all-black avatar comprised of her attire.

From what we hear, Sanjay Gupta has even provided a separate vanity van for Ash's daughter Aaradhya where his kids will keep her company while her mother is busy shooting. Jazbaa is said to be a remake of the Korean film Seven Days and stars Shabana Azmi, Chandan Roy Sanyal, Siddhanth Kapoor in prominent roles. Even John Abraham is said to do a cameo in the film. Produced by White Feather Films in association with Essel Vision, the film may premiere at Cannes Film Festival.