Will Smith, Hollywood superstar, started the year with a unique and interesting show titled Bucket List wherein every week he unfolds a set of real-life adventures which he tries to complete everything he wants to do in life as his bucket list. Last year, the actor was in India to understand the culture and cinema. He had then met Ranveer Singh and Karan Johar and even shot for Student Of The Year 2. 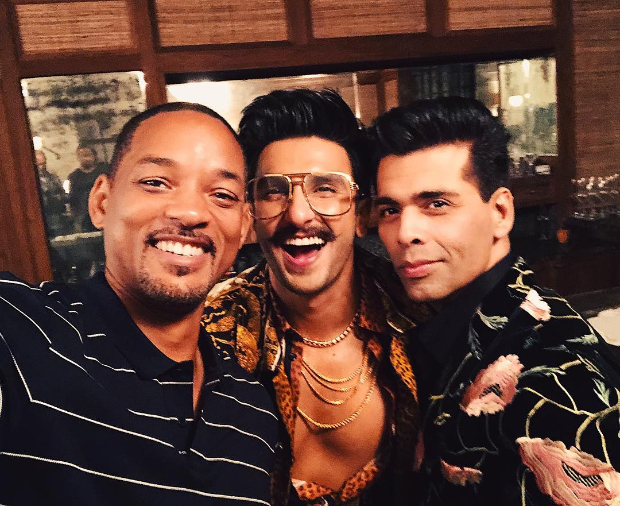 The latest episode was unveiled on Wednesday night wherein Will Smith begins the episode by driving a rickshaw himself. He visisted several places including Haridwar, Taj Mahal among other destinations. The actor even performed maha aarti on the banks of Ganga river.

Talking about spirituality and Bollywood, Will Smith meets Ranveer Singh who teaches him the nuances of being the ultimate hero of Bollywood. He even talks about how the hero is supposed to morally right, showcased his ‘Tattad Tattad’ music video from Ram Leela and even danced with Will.

Karan Johar too features in the episode where explains the 'dialogue baazi' to him. Ranveer even recreates the epic scene from Shashi Kapoor and Amitabh Bachchan's Deewar and recites the dialogues like 'Mere Paas Maa Hai'.

Lastly, the video showcases Will Smith trying to dance the Bollywood way. He even shared his experience of accidentally elbowing someone while trying to get the flute up. As it turns out, the actor learned choreography for the recreated version of 'Radha' song. He visited the set of Karan Johar's Student of The Year 2 and also danced with the lead cast- Tiger Shroff, Ananya Panday, and Tara Sutaria.

So far, the actor has swum cage-free with sharks, bungee jumped into the Grand Canyon, ran a half marathon, tried his hand at stand-up comedy and experienced formula racing with his son.

ALSO READ: Check out: Will Smith learns the ropes of Bollywood from Ranveer Singh and Karan Johar