After sweeping four awards at the Video Music Awards 2020 including the Best Pop category making history as the first Asian Act to win the award on August 31, BTS made history with their latest single. BTS became the first Korean group to debut at Hot 100 on Billboard Chart with their record-breaking English track 'Dynamite'. 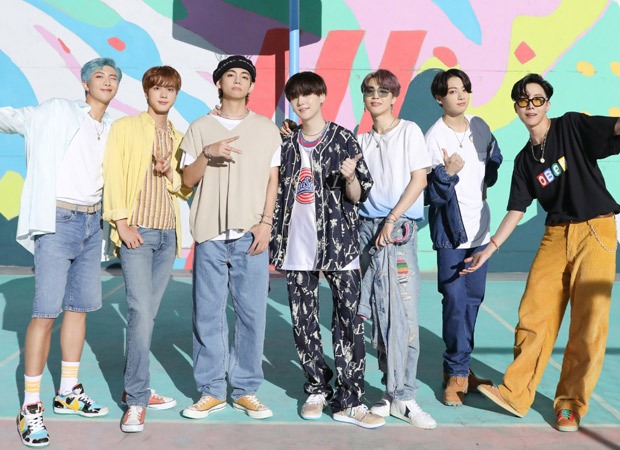 It has been an overwhelming day for BTS, who had been working hard for the past seven years in the music industry. Whilst trying to pen their thoughts on Twitter and their app Weverse, it took them a while to process this huge milestone. As tears rolled down their eyes, they expressed that they were grateful for it and how their fandom ARMY always supported them.

-TRANS
Love you, Love you, and Love you#BTS#ARMY#OurARMYWonAnAward#BTS_Dynamite #BTS @BTS_twt

Big Hit Entertainment, the parent company of BTS, released a statement in which every member reacted to the HOT 100 featurette. According to the Korea Herald, the leader of the group RM, who was also the first member of BTS, said, "I still can't believe it and it feels like I'm dreaming. Thank you to the composers for the great song, and I believe all of our achievements have been made with ARMY."

Jin explained the idea behind 'Dynamite' was to send out positivity. "'Dynamite' was a song we started making purely to have fun with our fans, and I'm surprised and really happy to hear about its unimaginable success," he told in the statement.

Suga, who has had a dream list of milestones he wanted to achieve as an artist, was overwhelmed to see the result. "I still can't believe we got No. 1. When I got a question about the goal for 'Dynamite'. I said I want to get No. 1 in Billboard Hot 100 chart but I can't believe my dream became a reality. We won't be complacent but work even harder," the rapper said.

Thanking the fans for their constant support, J-Hope further added, "I'm just really grateful of our fans. I started this career because I like dancing and music, but I never imagined our team to top the Hot 100 chart. I feel overwhelmed because our sincerity seems to have worked. I want to share all the glory with our fans."

Jimin said, "We released 'Dynamite' hoping it would give a little comfort to someone, not to break any records. But we got this amazing, unexpected news and I felt so happy and grateful. Thank you to my members who worked hard and our fans for loving us and supporting us.

Overwhelmed with emotions, V added, "It's a dream goal for any singer, but I never imagined that we could top the Billboard chart. When I first heard the news, I couldn't believe it, and I was surprised to see the result with my own eyes."

It is in fact a special day for the youngest one of the group, Jungkook. He is celebrating his 23rd birthday (24 in the Korean age system) today and has all the reasons to celebrate it. "It was like a dream when I heard we topped the Billboard Hot 100. Thank you Army. It makes me curious what our, BTS and Army's, limits are. I will continue to challenge myself and work even harder. Thank you again Army for trusting and supporting us," Jungkook concluded.

In celebration of Hot 100 and Jungkook's birthday, BTS did a surprise live stream to greet the fans and thank everyone for supporting them all the years. They said that whenever they achieve a new goal, they always celebrate it together and so do their fans. On Twitter and Weverse, they said they couldn't put together words to express their happiness as they were overwhelmed.

Many peers from the industry have congratulated BTS on their milestone including The Weeknd, MAX and Jonas Brothers, and many of their producers Pdogg and SlowRabbit and Korean artists.

Pdogg: “Wow~~!! Bangtannies finally became No.1 on Hot 100~! They really writes the history of Korean pop music!! As a part of Big Hit’s music team, I’m so happy and proud! Big Hit, Sihyuk-hyung, and Bangtan friends, congrats to all and I’m proud of you!!”https://t.co/yFEqiKRST3 pic.twitter.com/BySmJ8EA42

Pdogg: “it brings me back old memories anew~ it’s a sleepless early morning ㅜ you and i alike, we feel extra proud and happy ????” pic.twitter.com/iQhrkLkOij

really cool. this is so big for asian artists. huge congratulations to @bts_bighit https://t.co/G1lWgeYf90

BTS received a congratulatory message from South Korea President Moon Jae-in. "BTS has achieved its first No. 1 on the Billboard Hot 100 songs chart, writing a new chapter in K-pop history as the first Korean band to do so. After having topped the Billboard 200 main album chart four times, they have now reached No. 1 on both charts. It is truly amazing. It is a splendid feat that further raises pride in K-pop. The song “Dynamite,” which topped the list, is all the more meaningful as it has been composed to give a message of comfort and hope to people around the world who are struggling with COVID-19," the tweet read that was released via his official Twitter account.

It is truly amazing. It is a splendid feat that further raises pride in K-pop. The song “Dynamite,” which topped the list, is all the more meaningful as it has been composed to give a message of comfort and hope to people around the world who are struggling with COVID-19.

BTS responded to President's letter by saying, "President Moon Jae-in, thank you for your hearty congratulations this time as well. It's a difficult time, but we hope our song could give you a little comfort and positive energy. We believe that cities worldwide including our country will once again revitalize with their bright lights, and we'll continue to focus on doing what we are best at i.e., music."

their bright lights, and we'll continue to focus on doing what we are best at i.e., music.#BTS @BTS_twt

ALSO READ: BTS make history with 'Dynamite' as it debuts at No. 1 on Billboard Hot 100