BTS WEEK on The Tonight Show Starring Jimmy Fallon has come to an end! The popular band took the stage from September 28 onwards and each night gave some power-packed performances. Ending their residency on a very high and disco-filled note, the group performed their chart-topping single 'Dynamite' on Friday night. 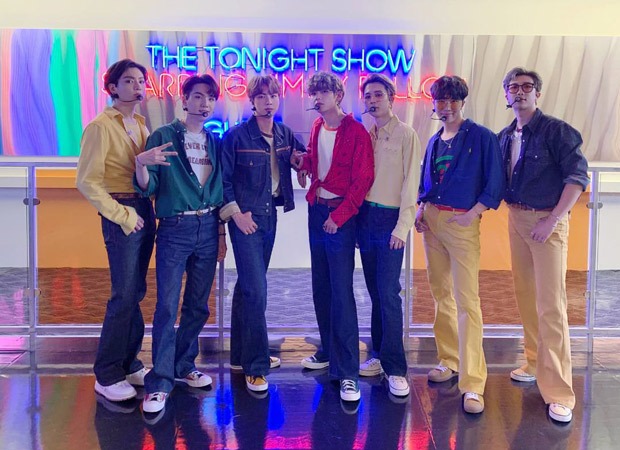 Pre-recorded in Seoul, the septet performed at a roller-skating rink which finally fulfilled the dreams of many! Dressed in retro-outfits, bringing new flavour with another 'Dynamite' performance and showcasing their versatility, BTS ended the week with a lot of dancing, fun, and love. At the end of the performance, the seven members - RM, Jin, Suga, J-Hope, Jimin, V, and Jungkook - were seen enjoying some time rollerskating together.

A day before, BTS performed 'Mikrokosmos' from their EP 'Map Of The Soul: Persona'.  The performance was pre-recorded at the Gyeongbokgung Palace of the Joseon dynasty. Built-in 1395, it is located in northern Seoul, South Korea.Jimmy Fallon thanked the fans for watching the episodes throughout the week. "I want to sincerely thank
@BTS_twt for choosing to spend a week with us. And to the Army... what can I say? You are a dream. You complete the picture. Keep shining. xo Chimmy," he wrote.

I want to sincerely thank @BTS_twt
for choosing to spend a week with us. And to the Army... what can I say? You are a dream. You complete the picture. Keep shining. xo Chimmy