South Korean powerhouse BTS performed a 30-minute special at BBC Radio 1,  on Wednesday, July 28 at the Live Lounge. The seven-piece act crooned their chart-topping singles 'Dynamite' and 'Permission To Dance' followed by a cover of Puff Daddy & Faith Evans' 'I'll Be Missing You'. 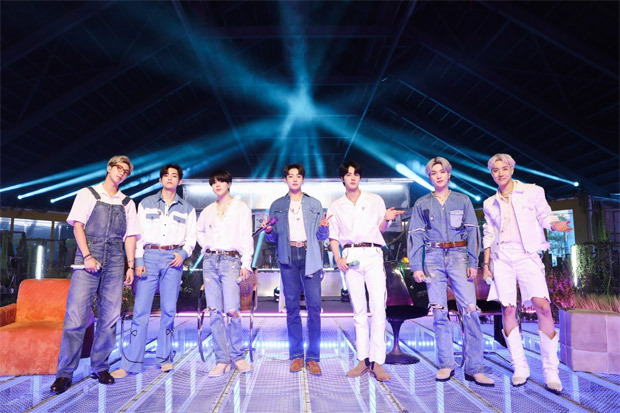 Recreating a massive set in Seoul with The Ghost Band in presence, BTS took over the stage to perform their chart-topping numbers. The group also covered 'I'll Be Missing You' as RM acknowledged the message behind the song ahead of their performances. They also added Korean lyrics dedicating it to the fans. BBC Radio 1 DJ Adele Roberts tweeted the lyrics of the song along with the Korean verses and adlibs.

"‘We’re now used to our routines taken away / But still can’t give up living on / We’re more worn out because we don’t know where this ends / We’re an island we made ourselves because we couldn’t trust each other / Hope an end comes for this tiring pandemic virus / Negative thoughts can sometimes be a minus / I knew it wasn’t the end so I couldn't say bye / When that day comes, will say “hi” like nothing happened," raps SUGA. Amid the pandemic, BTS had to postpone their stadium world tour and haven't performed at an in-person concert for almost 2 years. The 28-year-old rapper reflects on the pandemic situation and how it changed the lives of people around the world. SUGA refers to the regular routines that came to a halt as everyone got confined to four walls in quarantine life. Facing stress, burnout, negative thoughts amid the rollercoaster of a year, he croons that hopefully this all once and for all comes to an end. He ends his verse with positive thought that the might come soon when he reunites with fans and they greet each other as nothing happened.

"I hate this world, our traces became memories / I just empty my mind, trust without conditions / I fill it every day with just loneliness / Not like the longing that encircles me / We miss U baby / Whenever it may be / Here’s hoping we meet again, I promise," J-Hope raps in Korean reflecting on our the situation has turned their precious stage moments into memories. Feeling of longing and loneliness, J-Hope enforces that though they miss their fans, time will come when they meet again in any way possible.

Apart from the harmonises and adlibs between the BTS members RM, Jin, SUGA, J-Hope, Jimin, V and Jungkook, the live vocals were immaculate. BTS focused on the importance of the song, keeping the message in mind, and thoughtfully presented the cover.

For unversed, this is a tribute song to the legendary rapper Notorious B.I.G who died on March 9, 1997, at age 24.  This prompted P. Diddy (known as Puff Daddy at the time) to make a song for his friend along with Faith Evans, wife of Notorious B.I.G. who crooned the track along with R&B group 112. This track samples 'Every Breath You Take' by The Police.

BTS will also appear in the BBC One program on July 28. It will be a 30-minute documentary along with the interview and performances.

Meanwhile, the South Korean septet is soaring on the charts. Their second English single 'Butter' soared atop on Billboard Hot 100 for seven consecutive weeks followed by 'Permission To Dance' replacing it at No. 1. On July 26, BTS replaced themselves again as 'Butter' once again took the top spot with the new single at No. 7 position.

ALSO READ: BTS’ Jungkook gives an insight into his upcoming mixtape; talks about ‘Butter’ staying atop on Billboard Hot 100