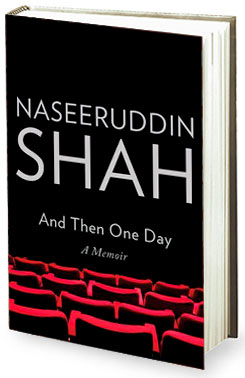 '...the thought that I was not qualified to be the lead in popular movies pinched greatly, so this reaction was very possibly my defense mechanism working in advance to counter the rejection I anticipated'

And so confesses Naseeruddin Shah through one of the many honest statements that he makes in his Memoir which is interestingly titled 'And Then One Day'. For those who have always wondered about his attitude to Hindi cinema being condescending, this is an answer that can be as straight forward and heartfelt that one can get.

For a man who has time and again being misunderstood due to his blunt persona, there is this and a lot more which is explained in good detail via this 300 odd page book which is easily one of the best accounts of a celebrity to have hit the stands. Naseeruddin Shah states things as they are and doesn't mince any words whatsoever when it comes to his personal as well as professional life. Now even if this means challenging his own acts over the decades, he does so in an unabashed manner, hence being as honest as one can expect in a memoir/biography.

Of course this was also what one expected from the man who has seldom been known to be diplomatically correct. Being outspoken is his key virtue and while he never once goes below the belt in this book either, he does bare his heart out without worrying much about what people have to say, both from his family as well as the industry. Talking about his various disappointments as well as successes, he gives a true-blue account of what has transpired in his life ever.

This also means that he doesn't deny money being the driving factor in many a decision that he has taken in his career. Of course his love for art and inherent talent as an actor paved the way for many of his endeavor (though it did take its own sweet time). However, at the time when survival was the key, he even decided to feature as an extra (yes, you read it right - details later) in the starting years. In the middle of this all, there were quite a few emotional upheavals that he went through, something that he has detailed ell without once hinting of any forced attempt at bringing on any pathos.

Instead, he makes sure that practically every incident from his life is told with a dose of humor. It could be heavy or light as per the need of the situation but the way he details his many wins, tragedies, highs and lows, it is the humor factor that works immensely in the written account.

Now this is what makes the book stand out from what many a biography has to say as they tend to take themselves way too seriously. However, Naseeruddin Shah doesn't fall into this trap and instead presents himself as a commoner who has pretty much seen it and done all in a roller coaster ride that his life had to offer.

Have a look at some of the sample anecdotes, and you would know:

* He left a big budgeted film which had a famous writer duo with blockbusters behind them. Reason? They wanted him to opt out of Albert Pinto Ko Gussa Kyon Aata Hai, which they considered to be much smaller. That irked him and he walked out. Can you guess the film?

* He was stabbed on the back - well, literally - by his (once) best friend Jaspal from FTII as he suspected him of elbowing his way into stardom. It was Om Puri who saved his life by overpowering Jaspal

* He gives a firsthand account of how Sholay was rejected in theaters and while the film picked up later, he suspects there was some 'feeding' into theaters by the producers

* He married a Pakistani woman Purveen in 1969 on impulse after a courtship. Later they drifted apart after they had a baby as he was not 'equipped financially or emotionally'. He married Ratna Pathak then

* He had played an extra in Raj Kapoor's Sapnon Ka Saudagar. To his horror, when he saw the film, he couldn't even spot himself in the crowd. Earlier, he had appeared in Rajendra Kumar's funeral scene in Aman

* He couldn't apply for Filmfare-United Producers' Talent Contest as he didn't have money for the portfolio shoot. Disappointed to begin with, he was later glad as the winner turned out to be Rajesh Khanna

* He was almost shortlisted for playing Gandhi but then didn't have any qualms as in his very first meeting with Ben Kingsley, he was convinced that the man was correct for the job

All of this and so much more is in the offering here which is easily the best biographical account to have come out on stands ever since Dr. Gayathri Sreekanth's 'The Name Is Rajinikanth' had made waves over six years back. Though quite a few celebrity books have arrived since then, none has managed to be so engaging and informative as Naseeruddin Shah's memoir.

Any regret? Well, the veteran actor decides to close the chapter at 1983 when his 'Masoom' released. Though one wonders why he didn't proceed post that, one can just hope that a sequel is in the offering where Naseeruddin Shah will narrate many an anecdote around the happenings in over three decades that have gone by since then.