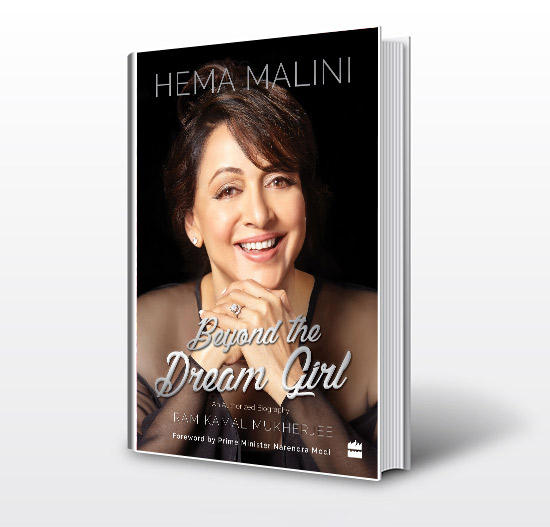 This could well be a rare instance when a Bollywood celebrity has seen two biographies coming her way. Hema Malini had earlier seen one in the form of Bhawana Somaaya's Hema Malini - The Authorized Biography. The book hadn't really created many ripples. Now author Ram Kamal Mukherjee, who has already put together a coffee table book Diva Unveiled: Hema Malini a few years back, pens one as well in the form of Beyond the Dream Girl. This one is in fact also tagged as an 'An Authorized Biography' and the much talked about launch that took place recently further adds on to the credibility factor.

So the question is, does the book turn out to be an interesting read? Let's just say that some of the most important aspects of Hema Malini's life, the ones that would actually entice audiences into going through this 200 odd page book, have already been covered in the last released biography. Be it the relationship between Hema Malini and her dominating mother, the uncertain start to her career, Raj Kapoor trusting her enough to launch her, her liaison with Sanjeev Kumar, the fact that Jeetendra and she were almost getting married, the eventual love story with Dharmendra and of course the discovery of Shah Rukh Khan.

Due to this reason, one looks forward to a lot more in Hema Malini - Beyond the Dream Girl. One thing that turns out to be better in this book though is the fluidity that Ram Kamal brings in his chapters. Unlike the last biography which was really text heavy and ended up turning you off as a reader, this biography is a lot more engaging. Hence, when you read about Hema Malini's initial days in the world of films to the anecdotes that she shares about working with her many co-stars [Shatrughan Sinha, Vinod Khanna and more] to the relationship that she shares with her daughters to her current life, you are indeed drawn in.

What she also does is briefly mention about the current relationship status that she has with Dharmendra and his first family (including the Deol brothers). This part of her life has been handled with utmost sensitivity and there is no malice whatsoever in sharing this account. Moreover, it is kept crisp and concise which lends dignity to the much talked about relationship for last 40 odd years.

However, as a reader you do want to know a lot more about her life and times but just like it was the case in the earlier biography too, here too quite some space is dedicated to her passion around classical dancing. This isn't all as there are extensive write ups on her career as a politician as well and one wonders how many would be actually curious about reading this side of her life. Yes, the book has been titled Beyond the Dream Girl which means expectations have been set right at the onset about this one going much beyond her life as an actress. But still, at the end of the day, she is THE 'dream girl'!

Nonetheless, the book is fair to the subject in question and it all boils down to what all and how much does she wishes to reveal about her personal life. An individual could take a Rishi Kapoor, Karan Johar or Naserruddin Shah route and come up with a tell-tale account or stay restricted as is in the case of Hema Malini.

As long as it doesn't venture into the kind of territory that Nawazuddin Siddiqui did in his memoir, it is all fine actually!