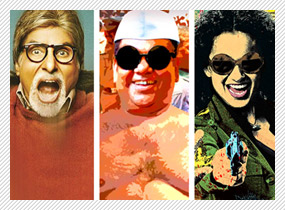 The weekend gone by saw the release of two films (Youngistaan, O Teri) that had their roots in politics and it's functioning. With election fever soaring and the process of voting kick-starting on April 7, and results being announced on May 16, there is a slew of films with a political backdrop or undertone that would hit the screens one week after another.

11th April - Bhoothnath Returns
BomanIrani is a corrupt politician and 'Bhoothnath' Amitabh Bachchan gets a reason to scare souls. Despite being dead, he fills in his nomination for candidature and gives Boman a run for his money in his own backyard. The film is set in comic genre. Nitish Tiwari had earlier co-directed Chillar Party with Vikas Bahl. While Vikas has already given a superhit by going solo with Queen, all eyes are on Nitish now.

18th April - Dekh Tamasha Dekh
A poor man gets crushed under the weight of a politician's hoarding and opportunists now want to search for his religious identity. Warring parties want to have a pie of his flesh, no pun intended. Satish Kaushik plays the politician whose fallen hoarding brings in all the 'dhamaal' in this socio-political satire. From a rather serious Gandhi My Father, filmmaker Feroz Abbas Khan moves to a light hearted take on affairs with Dekh Tamasha Dekh.

25th April - Kaanchi
Kaanchi - Mithun Chakraborty plays a corrupt politician in this film which is about an innocent rural girl's (played by newcomer Mishti) fight against power. With another veteran Rishi Kapoor playing an important part as well, one waits to see the kind of political route that Subhash Ghai, the man behind many a larger than life cinema, takes here.

25th April - Revolver Rani
Revolver Rani - Set in Chambal, is satire with a political backdrop to it. From Queen, Kangna Ranaut returns in the maniacal part of Alka Singh, who is the leader of a political party. The film is appearing to be as quirky as it gets and rest assured, even the political undertones would be bearing an out and out humorous stage and setting.

April - P Se PM Tak
While it is battling it out with the Censor Board, Kundan Shah's P Se PM Tak is hoping for release sometime in April. The film is about a prostitute (played by Meenakshi Dixit) who, by a stroke of luck, becomes the Chief Minister and then moves up to the ladder to the position of a Prime Minister. Kundan Shah's last commercial success was Kya Kehna [2000] and one waits to see if he scores with P Se PM Tak now.