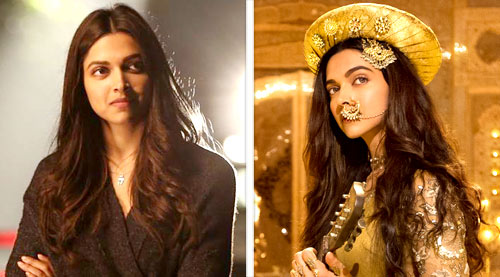 The last time she came together with Ranbir Kapoor and Ranveer Singh, history was written. As 'Dilliwali Girlfriend' of Ranbir in Yeh Jawaani Hai Deewani, she showed many what good chemistry can do to a romantic film. Later, when she turned 'Leela' for Ranveer Singh, many a dramatic encounters set the screen on fire in Goliyon Ki Raasleela Ram Leela.


Now that she would be seen with both Ranbir and Ranveer in quick succession, and that too in a span of just three weeks, all eyes are on how she makes it big with her ex-partner and the current beau.


"These are going to be exciting times, both for audiences as well as everyone associated with the two films," an observer comments, "Seldom does it happen when a leading lady is in a position where she calls the shots equally with her male co-stars. Deepika is by no means a prop in either of the two films. She has substantial roles in there and that sets her apart from her contemporaries."


What is being looked forward though is her on-screen chemistry with Ranbir and Ranveer.


"Tamasha is a contemporary affair by Imtiaz Ali and he has revealed that Deepika is playing Ranbir's muse in the film. Now that would be interesting as the promos too are indicating a different kind of a love story between the two," a source says, "On the other hand, she is playing the title role in Bajirao Mastani. What more does one need to say? As Ranveer's love interest in the film, she is shown as a dancer and a warrior. It is a lethal combination no less and the fact that she is being directed by Sanjay Leela Bhansali means that along with Ranveer, she would have quite a few dramatic moments to exchange."


Meanwhile, her producers are putting their money on the actress to make sure that she gets a solid platform to excel.


"Sajid Nadiadwala has taken the film to France and while Deepika was one of the four leading ladies in his Housefull, now she is the solo actress in Tamasha. On the other hand, Kishore Lulla and Sanjay Leela Bhansali are known for their lavish films. They did that last in Goliyon Ki Raasleela Ram Leela and they are doing that again in Bajirao Mastani. Deepika couldn't have asked for more," a trade guru adds.


Will Deepika score? Well, with the two films releasing on 27th November and 18th December respectively, the results aren't too far away.