During an interview with Bollywood Hungama, Parineeti Chopra had confessed that she wanted $ 5 million for the ‘jhoota churai’ [hiding the footwear] tradition. She had said, “Main bahut bahut paise lene wali hoon and I have to be his favourite saali.” And it seems that her wish had come true! She may not have got $5 million as a gift for the tradition but she definitely got what every woman loves – diamonds. And here’s what she revealed on the show BFFs With Vogue hosted by Neha Dhupia. 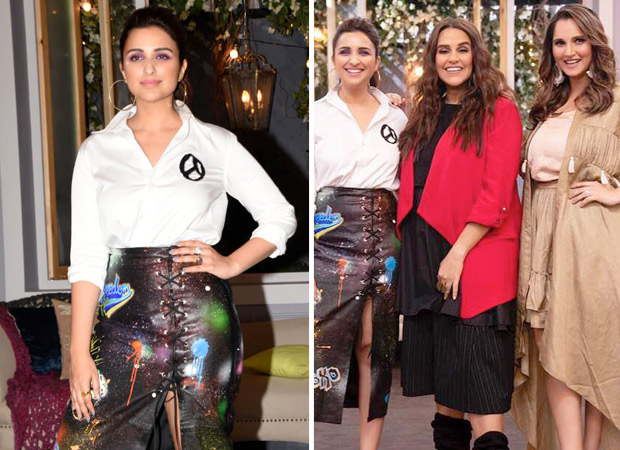 Recently Parineeti Chopra along with her bestie Sania Mirza were the guests on the BFFs With Vogue. Here’s when she decided to speak about the much talked about Priyanka Chopra and Nick Jonas wedding. As readers may be aware, the couple tied the knot in a lavish yet private ceremony in Umaid Bhawan, Udaipur and Parineeti Chopra [who is Priyanka’s cousin] was one of the bridesmaids. In recent media reports, the doting sister gave a glimpse of the jhoota churai tradition, where the bridesmaids are supposed to hide the shoes of the groom and the groom’s team has to find it. If not, the groom is supposed to bribe the bridesmaids with gifts or cash before getting the footwear back.

In case of Priyanka Chopra and Nick Jonas wedding too, both the families followed their respective traditions during the Christian and Hindu ceremonies. So when the time for hiding the footwear came, the bridesmaids were well prepared to bag a hefty sum as a gift in return for the shoes. The actress went on to speak about it on the Neha Dhupia show adding that they were in for a pleasant surprise, seeing the kind of preparation, their jiju aka Nick Jonas had done for them. It seems that all of them received diamond rings as a part of the jhoota churai tradition. The actress couldn’t stop gushing about her brother-in-law’s gesture, calling him the best ever!

On the work front, Parineeti Chopra has a few releases in 2019 which include Kesari, Sandeep Aur Pinky Faraar and Jabariya Jodi.