Last Updated 30.06.2022 | 10:44 PM IST
feedback language
follow us on
Bollywood Hungama » News » Bollywood Features News » Behind The Scenes: These unseen photos from the sets of Suhana Khan, Agastya Nanda starrer The Archies is all fun and smiles

Star kids Suhana Khan, Khushi Kapoor and Agastya Nanda are all set for a lavish OTT debut. The trio along with an ensemble cast are planning to bring back their version of the age-old comics The Archies. While a teaser of the film was released recently, proud parents of these kids including Shah Rukh Khan and Gauri Khan took to social media to express their pride over the children’s debut. Now, we came across another set of photos, behind the scenes from the sets of The Archies. 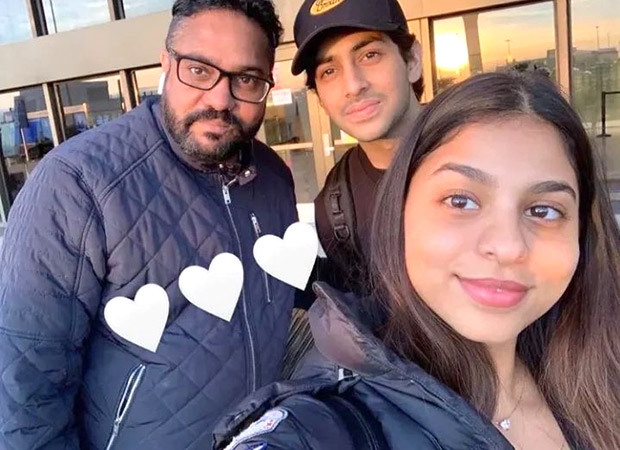 Behind The Scenes: These unseen photos from the sets of Suhana Khan, Agastya Nanda starrer The Archies is all fun and smiles

Suhana Khan has been a social media star for a few years now and while her popularity will only get a boost with her upcoming film, her fans are already going gaga over the film. In fact, Instagram fan pages of the newbie have already made these behind the scene photos viral. While one photo features her with her onscreen love interest Agastya Nanda, the other one includes her shooting alongside the entire cast of the film.

If that’s not all, in yet another set of images Suhana Khan and her brother Aryan Khan were seen posing with a little girl.

As for the film on The Archies comics, the said film is directed by Zoya Akhtar. The film is expected to feature Suhana Khan as Veronica, Agastya Nanda as Archies, Khushi Kapoor as Betty, Mihir Ahuja as Jughead among others. The comics based movie will also star Yuvraj Menda, Vedang Raina and Aditi Dot, Tara Sharma, and Koel Puri in pivotal roles. Not too long, the teaser that was released garnered a lot of attention. The film will release next year i.e. in 2023 and will exclusively stream on Netflix India.