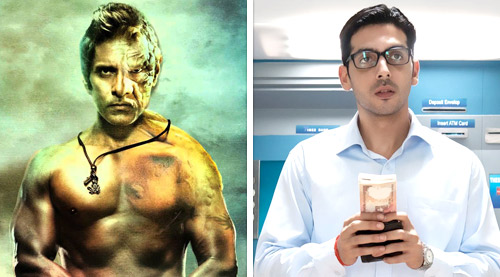 The lean season is over. During the past few weeks Bollywood only saw the release of two major films PK and Tevar. But now, distributors won't hold back their films back any more.


This week will see the release of a flood of films, beginning with Shankar's long-awaited adventure-spectacle I in Tamil which takes over the South Indian market during Pongal in Tamil and Telugu on Wednesday, and in North India on Thursday with the Hindi language print.


Most exhibitors see Shankar's I as the clear winner of the coming week.


Roshan Singh a leading exhibitor from Bihar says, "After PK and Tevar audiences are looking for a third dimension of entertainment. Whatever it is, the follow-up film has to be grand spectacular and dramatic. I fits the bill."


According to Singh the only minus point to I's full-on impact in the Northern belt is leading man Vikram's restricted reach among Hindi audiences.


But then, look at the other releases this week. What star-power can the other films of the coming week boast of? New-director Ritesh Menon's Crazy Cukkad Family doesn't sound right. It stars lyricist Swanand Kirkire with the BA Pass seductress Shilpa Shukla. I don't know if any lyricist who has converted to hero-giri.


MSG: The Messenger Of God, apparently a devotional film, features an unknown cast and is likely to appeal to the sect that it represents.


These films are hardly expected to entice audiences into theatres in large numbers.


With this week's other release Sharafat Gayi Tel Lene (SGTL), Sanjay Khan's son Zayed Khan whose career so far has been stalked by setbacks hopes to make a comeback. Directed by Gurmeet Singh to whom goes the credit for directing Dimple Kapadia in her loudest performance ever in What The Fish, SGTL is a well-intended morality tale about an honest man's misadventures in a dishonest world. A kind of Kejriwal on the right side of the lane.


Lastly and lustily there is Bhushan Patel's Alone. Contrary to the title the film's leading lady Bipasha Basu is seldom seen alone anywhere these days. Wherever she goes Bipasha's little lamb (her co-star Karan Singh Grover) is she sure to follow. Undoubtedly the link-up between the luscious lady and the beefy bimba (desi masculine for bimbo) will be terminated as soon as Alone is released. We've seen it happen too many times in the past to be taken in.


Even if Mr Grover is Ms Basu's new arm-candy does anyone care to see the film just because its 'mojo'-masti mooded lead pair is telling us how much they enjoy one another's company?
Go have fun at your own expense.