The competition is getting tougher in Colors’ celebrity dance reality show Jhalak Dikhhla Jaa Season 10 and so does the quotient of dance, entertainment, and extravagance. The latest episode of Colors’ Jhalak Dikhhla Jaa would revolve around a Bollywood theme where the contestants would be giving their tribute to popular actors. Many contestants were seen performing and paying tribute to some of the biggest stars in the industry. Amruta Khanvilkar, who is a self-confessed Madhuri Dixit fan decided to dance to the JDJ judge’s song from her film Devdas. 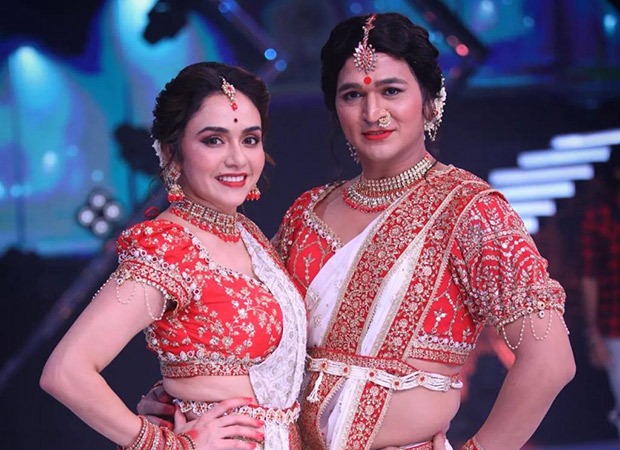 Amruta Khanvilkar was seen giving tribute to Madhuri Dixit by performing her song ‘Dola Re Dola’ from her movie Devdas, which also featured Aishwarya Rai Bachchan alongside her. The actress recently shared a photo of her performance and revealed that she became the first contestant to get full 30 / 30 marks in her performance. She shared a series of photos on her Instagram saying, “Swipe to know the whole story of the #first30 of #jhalakdikhlajaa10 season. Danced with my absolute favourite and the fab @ashishpatil_the_lavniking … you r special ashu. Don’t forget to watch the full 30 and #standingovation act on the iconic song #dolaredola this Saturday only on @colorstv.”

Furthermore in another post, she also shared a promo of Jhalak Dikhhla Jaa 10 where fans can get a glimpse of her performance with her choreographer-partner, Ashish Patil.

Well, there is no doubt that Amruta has been performing very well on the show and has always been getting positive and good comments from the judges and votes from the audience. The judges and the fans are having a lot of expectations from the actress and soon she will be giving a rocking performance.

Jhalak Dikhhla Jaa returned after a five-year hiatus on Colors. The ongoing season of Jhalak Dikhhla Jaa 10 features Madhuri Dixit as the judge alongside Karan Johar and Nora Fatehi. The show went on air on September 3 and featured several known names from the entertainment industry like Nia Sharma, Paras Kalnawat, Niti Taylor, and Rubina Dilaik, among others.

Also Read: EXCLUSIVE: Amruta Khanvilkar opens up about her first performance on Jhalak Dikhhla Jaa; says, “I wanted a hatta katta guy but I found this really tiny, thin guy”