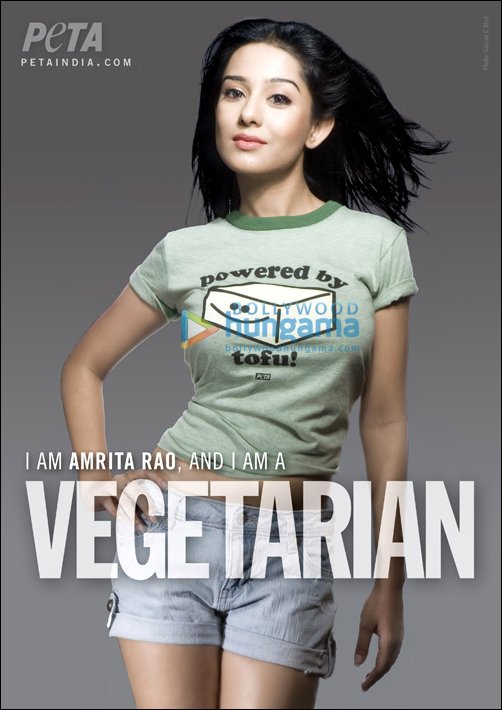 Wearing shorts and a T-shirt that reads, "Powered by Tofu", Amrita Rao appears in a sexy new pro-vegetarian ad for People for the Ethical Treatment of Animals (PETA) India. In the ad, which was shot by Gaurav C Bhat and styled by Swapnil Shinde, Rao proudly proclaims, "I Am Amrita Rao, and I Am a Vegetarian".

Rao is best known for her girl-next-door appeal and for her role in the film Vivah, in which she stars opposite fellow vegetarian and PETA supporter Shahid Kapoor.

"I call being vegetarian the 'Wow Rao' diet. Wow because I know that being vegetarian is the best thing I can do for myself, the animals and the environment," says Amrita, "Pulses can get pulses racing, while corpse cuisine slows you down. Kick the meat habit and you'll look and feel better than ever."

Why is Rao leading the charge to go vegetarian? "For one thing, vegetarians are, on average, fitter and trimmer than meat-eaters are, so the best thing that young people who want to look their best can do is to keep meat off their plates. Also, the consumption of meat and other animal-derived products has been conclusively linked to heart disease, diabetes and cancer," she adds.

Going vegetarian is also the kindest gift that you can give Mother Earth: a recent United Nations report concluded that a global shift towards a diet free of animal products is necessary to combat against the worst effects of climate change. And, of course, meat is murder on animals: every vegetarian saves the lives of approximately 100 animals each year.

Rao joins a growing list of celebrities - including Lara Dutta, Pamela Anderson, Shahid Kapoor, Sir Paul McCartney, R Madhavan and Anil Kumble - who have teamed up with PETA to promote a healthy and compassionate vegetarian diet.

Amrita Rao opens up about her no kissing…

Amrita Rao and RJ Anmol in their first ever…