Amitabh Bachchan penned a letter to late actor Irrfan Khan’s son Babil Khan. Amitabh worked with Irrfan in the 2015 movie Piku along with Deepika Padukone. Babil shared the letter on his Instagram handle on Friday.

The note printed on a letterhead included Amitabh Bachchan’s name and his house address of Prateeksha. The whole letter was printed out.

The letter stated, "Life is transient and death is unfathomable, but 'Friendship' transcends death. Memories made, create a lasting impression on those left behind, and will never be forgotten. Each time we are reminded of a loved one through a phrase, a joke, an action. These are the things that will keep us close despite death."

Thanking the megastar, Babil added red heart emojis. The actor also added, “Your father Irrfan was a great soul and everyone whose lives he touched, are better for having known him. He is missed dearly." 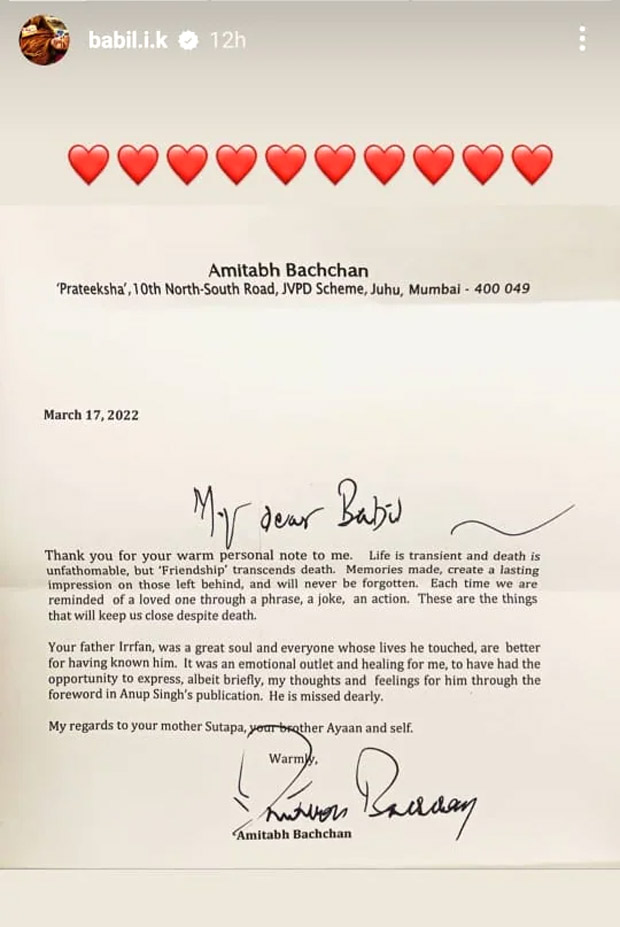 At the end Amitabh sends his regards to Babil, his mother Sutapa Sikdar and younger brother Ayaan.

Irrfan was diagnosed with neuroendocrine cancer in 2018. He was in London for his treatment but sadly died on April 29, 2020. He was last seen in Angrezi Medium, released weeks before his death.

His son Babil is set to make his acting debut with Anvita Dutt directorial Qala, along with Tripti Dimri, Swastika Mukherjee and Neer Rao.