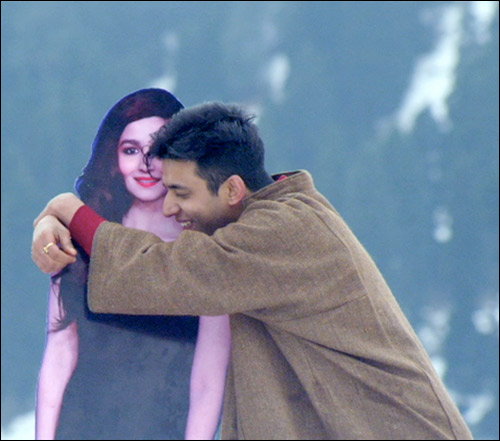 Shailendra Singh's directorial debut Sunshine Music Tours and Travels emits his personality, that of chasing dreams and the fact that you shouldn't be scared of the same, with being truthful towards what you want one will surely achieve his goal, and that's something that Shailendra's career graph shows. His directorial debut, a musical road trip is also about chasing dreams and one of the characters Ashrut Jain better known as Raja Romeo in the film dreams about none other than the beautiful bubbly Alia Bhatt and wants to date her.

A source from the sets revealed, every character has a back story, a dream that puts them all on the bus for a mad trip and Ashrut is in awe and loves Alia. Not only that but throughout the film, he has carried a cut out of hers, expressing his love for her. But he goes a step ahead and has also written 'Alia Chalisia', Hai aalia tu sundarta ka sagar, Hai alia tere talent ka azhar, Oscar ki trophy tu lana Desh ka tu naam banana. While only time will tell whether Ashrut's dreams will come true or not, for more of this crazy musical road trip, one needs to hit the theaters on September 2.