Last Updated 27.11.2022 | 9:58 AM IST
feedback language
follow us on
Bollywood Hungama » News » Bollywood Features News » Alia Bhatt shares photos with Ranbir Kapoor and family from her baby shower and it is all about ‘love’

Alia Bhatt and Ranbir Kapoor, who tied the knot in April 2022, are all set to welcome their first child. The couple announced the arrival of the baby in June and now, as the due date nears, the Bhatt-Kapoor family decided to make it special for the couple by hosting a low key and serene baby shower ceremony. The couple celebrated this special moment with Dussehra and the photos shared by the Brahmastra actress on social media is all about ‘love’ that was showered on the parents to-be as well as their little one. 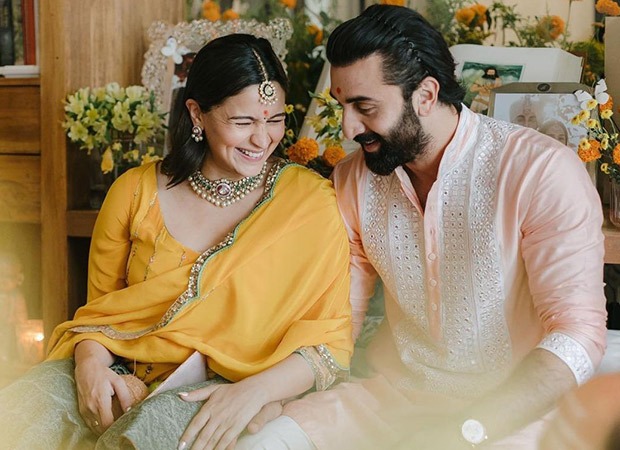 On October 5, the Kapoor and Bhatt family came together to celebrate the baby shower of Alia Bhatt and Ranbir Kapoor. Present at the event were mothers Soni Razdan and Neetu Kapoor along with their respective siblings Shaheen Bhatt and Riddhima Kapoor as well as Karisma Kapoor, Rima Jain, Shweta Bachchan Nanda, among others. After the family uploaded a series of photos on their Instagram stories, Alia Bhatt posted another set of pictures from the event and captioned it saying, “just … love ????????????????????????????” The families were dressed in ethnic outfits, with Alia glowing in yellow whereas Ranbir Kapoor looked suave in pink.

On the work front, Alia Bhatt, who was last seen in Brahmastra, is gearing up for her next release which is her Hollywood debut Heart of Stone, which features her alongside an ensemble cast with the likes of Gal Gadot and others. The actress also recently launched a new range of maternity wear under her kids apparel brand Edamamma. Alia also kicked off her debut production venture with Darlings. As for her films, her next Bollywood venture, Rocky Aur Rani Ki Prem Kahani with Ranveer Singh is in the pipeline for release and a date would be locked after she resumes movies post her pregnancy.