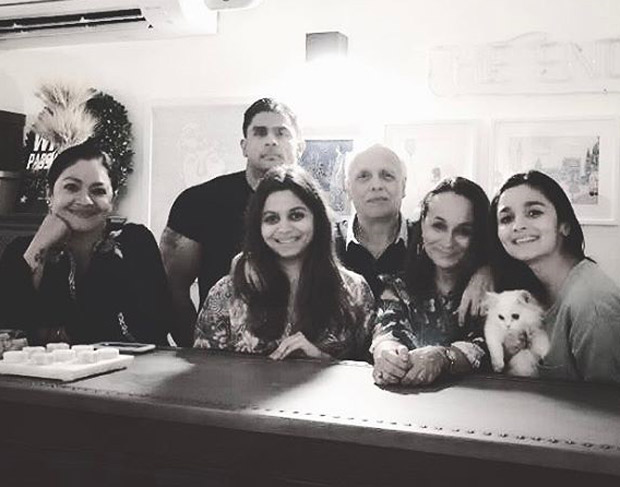 Just a day ago, we had reported that Alia Bhatt decided to spend her Mother’s Day partially with Mother Nature as she decided to take back a turtle to its natural habitat. She had been to the wildlife conservation unit in Dahanu, which is located in the outskirts of Mumbai and despite the long travel; the actress also took out some time for her family on the same day.

Like many other actors, Alia Bhatt too celebrated the special day with her mother by organizing a small get together of sorts with the rest of the family. Readers may be aware that Alia shifted to her own pad along with her sister Shaheen Bhatt of late and the actress decided to use this opportunity to have a family dinner.

Not only her parents, Soni Razdan and Mahesh Bhatt were a part of this private dinner but also her step-siblings Pooja and Rahul Bhatt too attended the same. Mahesh Bhatt couldn’t stop gushing about the dinner and he was overjoyed to see ‘his girls’, namely Alia Bhatt and Pooja Bhatt take time out and make it to the same despite their work commitments.

On the other hand, Shaheen Bhatt of the Bhatt sisters’ trio captured the moment of the family dinner and shared it on social media captioning it in a simple manner saying ‘Mine’. Talking about the same, Mahesh Bhatt revealed that the most of the conversation revolved around his son Rahul Bhatt who is a fitness freak and also about his wife Soni Razdan’s TV show Kya Tu Meri Laage.

Mahesh Bhatt also added that the dinner was a short lived one that started at 8.30 pm and wrapped up 10 pm but the star of the evening was said to be Edward, one of the three cats that Alia owns. Apparently, the cat had kept the entire family entertained with Pooja constantly clicking pictures of his antics too.