Well, after her Gully Boy co-star Ranveer Singh took the internet by a storm with his dance at his bestie’s wedding, it is time for Alia Bhatt to set the social media on fire! No, she ain’t grooving to any of the chartbusters from her film as yet but we are talking about the bridesmaid avatar that she has donned for her friend’s wedding. The actress seems to be getting quite rave reviews for her bridesmaid look she posted on Instagram. 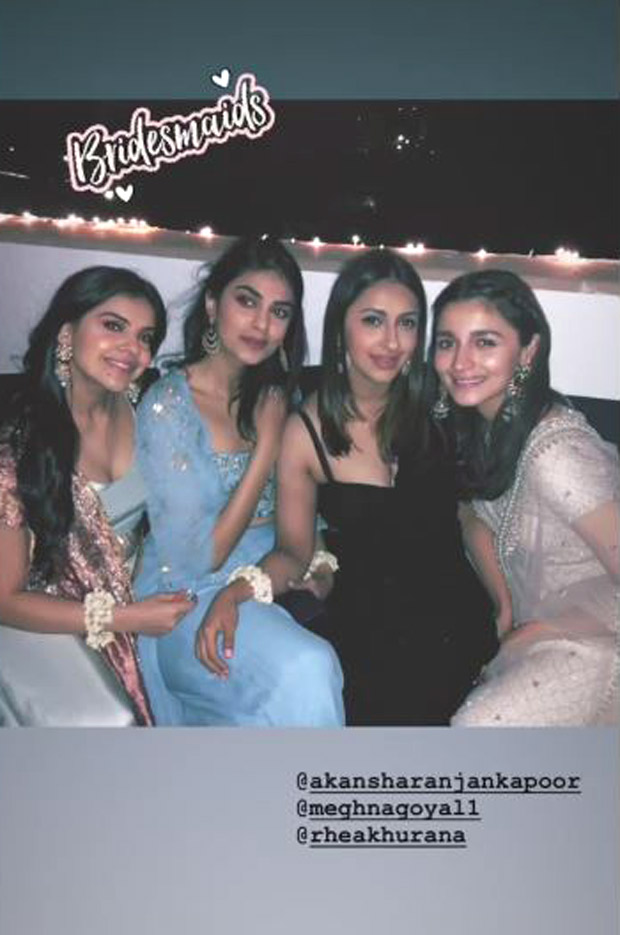 Alia Bhatt shared some intriguing Instagram stories on the platform wherein we get to see the Gully Boy actress in a traditional avatar. While those trendy jhumkas are an apt match for her lehenga avatar, her simple makeup acts as the perfect add-on. The actress shared a boomerang video of her playing with black shades and also a photo with the other bridesmaids on the social media platform. Fan clubs too seem to be quite impressed with the actress’ looks and have been sharing the same on their respective pages.

This is not the first time we got a glimpse of Alia Bhatt as the bridesmaid. The actress has been a bridesmaid for her friends in the past too and has even performed on their sangeet. Coming to her marriage, the Bhatt girl recently rubbished the marriage rumours with her beau Ranbir Kapoor. While the actress had confessed that she is in a happy space in the relationship, she spent her Valentine’s Day with her Brahmastra co-star this year.

On the work front, Alia Bhatt is riding high on the success of Gully Boy. The actress will next feature with Varun Dhawan in the multi-starrer Kalank, starring Madhuri Dixit, Sanjay Dutt, Sonakshi Sinha and Aditya Roy Kapur. She will also be featuring in yet another multi-starrer Takht with Ranveer Singh, Kareena Kapoor Khan and others as well as in the superhero drama Brahmastra and her father’s ambitious film Sadak 2.