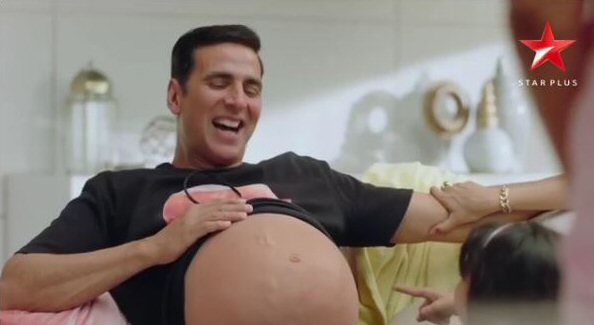 From action to comedy, we see a major drift in the image of Akshay Kumar not only on the big screen but also on the small screen. Earlier we had reported that the ‘Khatron Ke Khiladi’ host will now turn judge for a comedy show ‘The Great Indian Laughter Challenge’. The promos of the same have already gone on air and the makers have decided to opt for a unique ad campaign.

Akshay Kumar, who is riding high on the success of Toilet - Ek Prem Katha, recently shot for the promo of the show The Great Indian Laughter Challenge and his avatar in the commercial left many surprised. The actor was seen sporting a baby bump [as the pregnant man] in the ad that features him as the ‘baap’ of comedy superstars who will ‘deliver’ the next generation of superstars. The promo was shared by the superstar on all of his social media platforms saying, “Duniya soch rahi hai yeh ajooba kaise hua? #ApnaHeroPetSe hai!”

As for the show itself, Akshay Kumar will be seen judging the fifth season of ‘The Great Indian Laughter Challenge’ that is making a comeback after nine years. It will have popular stand-up comedians Zakir Khan, Hussain Dalal and Mallika Dua as the mentors. Reports have it that the superstar is taking keen interest in the show and that he has even planned for a workshop for the three mentors of the show. On the other hand, the show is said to be launched by the end of September.

Talking about his future projects, Akshay Kumar recently was shooting for his wife Twinkle Khanna’s debut film production PadMan which is slated for release early next year. The actor, who will take off for a birthday trip, will soon also resume the shoot of Reema Kagti’s period sports drama Gold after returning from the same.