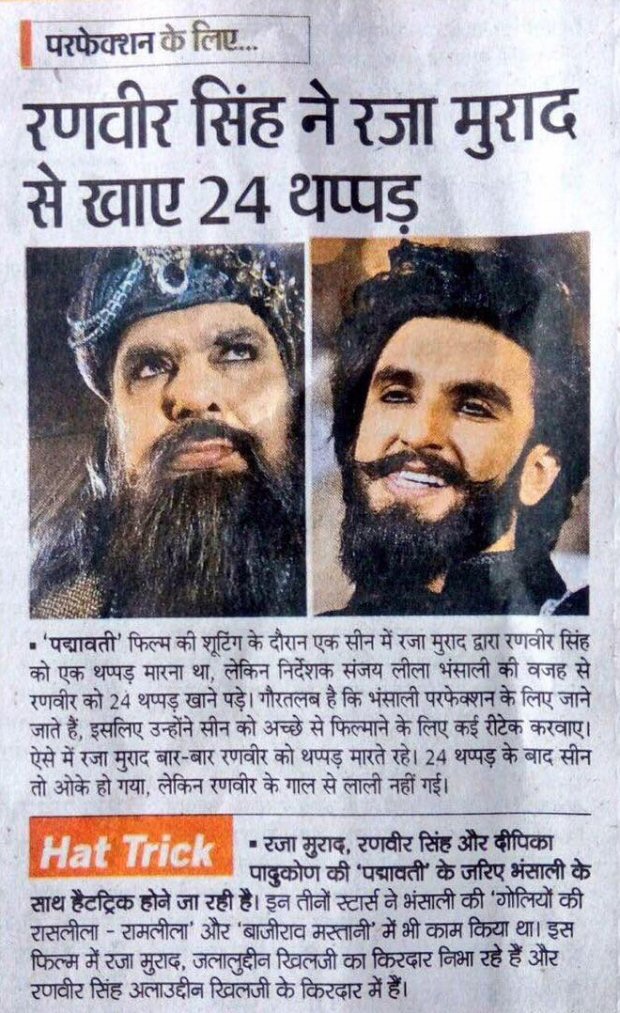 We all know that Ranveer Singh can go to any lengths to prep for his character even if it means becoming a recluse and staying away from the world. But definitely getting slapped so many times wasn’t a part of the plan. However, shedding his inhibitions for even such a sequence, the actor allowed himself to be slapped over 20 times to get it perfect.

It so happened, that Raza Murad who plays the role of Jalal ud din Khilji had to slap his on screen son Ranveer Singh who essays the character of Alauddin Khilji. Although it was just a matter of one slap, considering Sanjay Leela Bhansali’s obsession for perfection, there were 24 takes for the same scene. This resulted in Ranveer Singh being slapped about 24 times by his reel life father. While the last shot was perfect, it was Ranveer’s cheeks that suffered the most.

Revealing this was Ranveer Singh himself, who posted a picture of this report on social media that spoke about the entire incident with a caption that read, “True story!”

As for the film itself, let us tell you that Ranveer Singh, for the first time, will be seen in the role of an out and out antagonist in Padmavati. The film features his real life girlfriend Deepika Padukone in the titular role and Shahid Kapoor plays the role of her on screen husband Raja Rawal Ratan Singh. Although there are many speculations about the film being delayed, we hear that the film will release in November this year.