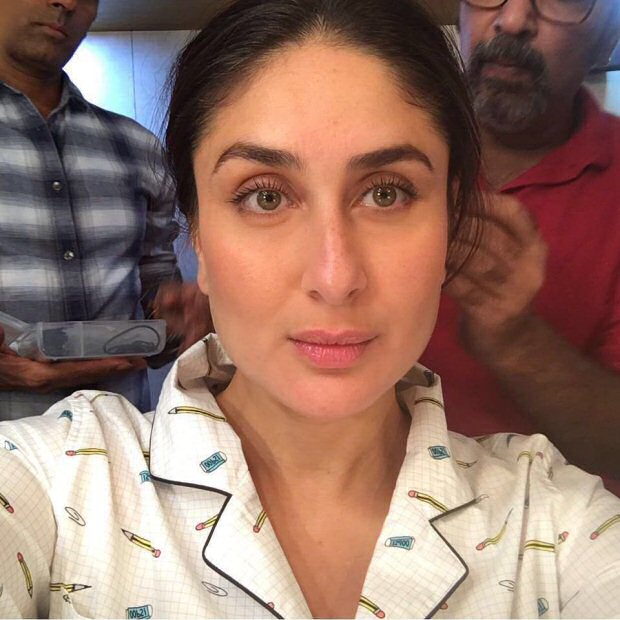 Just a day ago, we had reported that Kareena Kapoor Khan had taken off to Delhi to kick start the shoot of her film Veere Di Wedding. Audiences may be aware of the fact that it is her first film after the birth of Taimur and the actress is obviously super excited to resume work. Giving a sneak peek into the first day shenanigans right from the sets of the film was the actress.

While Kareena Kapoor Khan is not a fan of social media, the actress’ video was posted on the official Instagram page of the filmVeere Di Wedding. The video in question features Kareena Kapoor Khan getting her make-up done along with her team which includes popular make-up artist Mickey Contractor and renowned hair stylist Pompy. Talking enthusiastically about her first day on the sets of the film, the actress was also accompanied by producer Rhea Kapoor.

The caption of the video reads, “The wait ends. The journey begins. #BeboBackOnSet #VeereDiWedding@rheakapoor .” Rhea Kapoor further added, “Aaaaaand here we go! Day 1! Follow @vdwthefilm for live on set shenanigans and updates from our crazy cast and crew, first up? #bebo.”

In another video posted by them, Kareena Kapoor Khan mentioned that she even has Taimur joining her shoot schedule and the actress mentioned how her little boy requires an army to take care of him. The said video is captioned, “The million dollar question on the sets of #VeereDiWedding: Where is little #TaimurAliKhan?”

As for the film Veere Di Wedding, we hear that the makers plan to kick start the film with an important wedding sequence. The chick flick also features Sonam Kapoor, SwaraBhaskar and ShikhaTalsania in lead roles and also has web series - star Sumeet Vyas paired opposite Kareena Kapoor Khan.

Veere Di Wedding was announced last year but the shoot delayed owing to few script changes as well as Kareena Kapoor Khan’s pregnancy. The film also faced title trouble owing to its extreme resemblance to another Bollywood film [starring Jimmy Sheirgill] but braving all the obstacles, the film finally went on floor in the capital.